The drawing, entitled A fishing boat on Brighton beach, circa 1824, is in pen and brown ink over pencil and measures 17cm x 17cm square. It is presumed that the picture is from the collection of one of the artist’s children, due to the 20th-century inscription on the verso suggesting it belonged to Constable’s last surviving child, Isabel Constable (1822-1888). 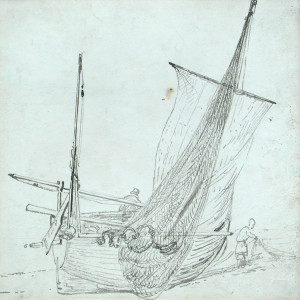 Constable’s visits to Brighton began in 1824 when he took a house there for a few months in the hope that his wife Maria and their children would benefit from the sea air. The family returned to the town for further extended visits in 1825-6 and then again for the long summer of 1828. Constable would join them there as often as he was able, benefitting from the regular coach service which ran between London and this now fashionable coastal resort.

The house which Constable selected for the family in 1824 was situated on the western edge of Brighton, nor far from the beach, and indeed it was not long before he began to make sketches, initially in oils, of the life along the shore.  At first he was dismissive of the town, writing in a letter to his friend John Fisher – penned shortly after his arrival –   that it was nothing but ‘Piccadilly … by the sea-side’ (R.B.Beckett, ed, John Constable’s Correspondence: VI; The Fishers, 1968, p.171; letter postmarked 29 August 1824).  In fact Brighton was still a working fishing town around this date, and indeed in the same letter Constable told Fisher how much he admired the various ‘picturesque’ fishing boats on the beach, and these – and their crew – were soon to become a subject of his close scrutiny.