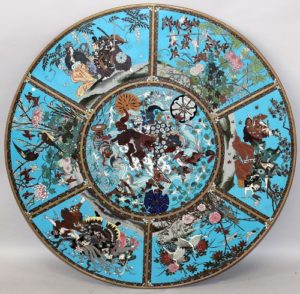 The 30in diameter plaque, showing various scenes against a turquoise ground, took £4100 hammer in a sale that threw up a number of highlights. 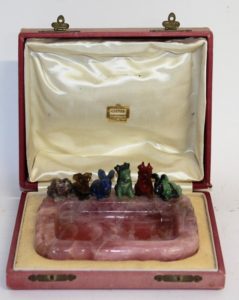 They included okimono from the Meiji period, decorative figures that can come in a number of materials. Here, an unusual and fine quality 6in high signed ivory example of a multitude of oni, or demons took £1800, while a 6¾in high ivory bijin, or beauty, changed hands at £1000.

As predicted, a Japanese woodblock print by Hasui Kawase (1883-1957) proved to be one of the most sought-after items. Carrying hopes of £300-500, the stunningly decorative, colourful and accomplished c.1924 view of Kozu in Osaka took £1000. Part of Hasui’s third travel series is printed in oban size (10 x 15 inches), it demonstrated his accomplished realist style and his ability to create a sense of place and atmosphere.

Chinese wares also did well. A late 18th century redwood artist’s table, measuring 6ft 6in x 3ft 7in, sold for £2700, while a 9¾in long jade-handled magnifying glass, possibly of the Ming period and repaired, took £1900 and an 8½in long, early 20th century enamelled and inlaid silver hand mirror, fetched £1100.

A bid of £3000 secured a 7¾in high Chinese purple ground Tibetan market porcelain ewer, which featured a Qianlong seal mark to the base. An even higher bid of £3700 came for a 15in high Ming-style blue and white Meiping porcelain vase, while pair of 18½in high reproduction wucai porcelain gu vases sold for £1200.