Entrance to the Dwellings, an important work by LS Lowry painted in 1933 leads Bonhams Modern British and Irish Art sale in London on 15th June. The painting has an estimate of between £600,000-800,000. 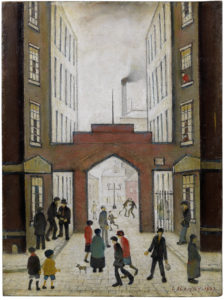 The early 1930s were significant for Lowry.  His reputation was growing and his pictures began to appear in exhibitions across northern England. Rochdale, Southport, Bradford and Oldham all displayed his work and the latter purchased The Procession for £16 in 1934.  In the same year he was elected as a member of the Royal Society of British Artists.

The dwellings of the painting’s title were Salford Improved Industrial Dwellings, constructed in 1870, which provided housing for working people until they were demolished in 1960. The configuration of the gateway to the housing scheme particularly appealed to Lowry who produced a pencil sketch of it in 1931, some details of which he used in the oil painting two years later.

The painting also represents a development in Lowry’s technique. Around this time, his pictures started to incorporate heavier and more intricately worked impasto. The thick paint is built up layer on layer in a variety of differing but subtle colours, beginning with white and then ochre, which is then intricately scraped into to describe various details throughout the composition. Architectural features, railings and the paving of the street have all been enhanced using this effective technique.

Bonhams Director of Modern British Painting, Matthew Bradbury, said, “Clearly Lowry viewed this specific gateway with the four storey buildings flanking it as deeply symbolic of the urban, industrial environment he frequented. Figures face us, turn their backs on us, chat with one another, walk in profile or peer out from windows above so that the viewer’s eye is constantly kept stimulated. They represent the gritty reality of inner city northern England during the inter-war period and were the essence of Lowry’s art.”