Britain has been left behind as the world’s leading nation for buying fine wine, according to Barnebys, the international auction search engine. 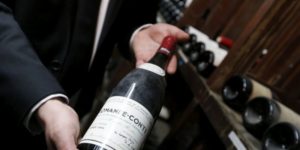 With the last decade witnessing uninterrupted growth in the value of the best fine wine sold at auction, British buyers, who dominated the market for a decade, have now been overtaken by demand from the United States, France, Italy, Germany and China. In fact China has come from nowhere to fifth place in a decade.

The global wine auction market remained stable in 2015, falling just 1% in value from $348 million in 2014 to $346 million in 2015. But the best of the best wines continues to grow in value, a pattern for wine that is echoed in many other areas of the collecting market, paintings, cars, jewellery and Asian Art. The advice could be buy the best to invest.

In the early 2000s Brits were the major wine buyers on the auction market, but no longer. The last few years have seen rankings change dramatically as prices rose and today the Chinese are having a massive impact on wine sales. China’s new billionaire class has pushed the eastern giant to the fifth biggest buyer of wine at auction. Hong Kong has been hollowed out underground with miles of air-conditioned wine cellars to hold this new liquid gold.

Perhaps why when Andrew Lloyd Webber sold part of his wine collection five years ago he chose to sell in Hong Kong at the Mandarin Oriental hotel in Hong Kong with Sothebys.  The creator of Cats and Phantom of the Opera added an extra £3.5 million to his bank balance with the sale of some 8,837 bottles choice bottles from his vast wine collection.

In recent years, the most highly valued wine has experienced a significant and steady upward growth on the auction market. In fact wine has outperformed stocks and shares in 2015. Last week a case of red wine sold for £211,000 a new world record. So it’s not surprising that the world’s top auction houses make wine sales a permanent fixture on their calendar. Last year, the biggest wine auction in the world, Hospices de Beaune, Christie’s charity wine auction, brought in over £8.67 million.

Stephen Mould, Head of Sotheby’s European Wine Department, commenting on the recent sale of a renowned Continental collection said: “The £1.5 million sale total, more than doubled the low estimate and is a fitting testament to the quality of this extraordinary cellar. We saw buyers from all four corners of the globe competing to secure rare Burgundy vintages from the legendary Henri Jayer.  The 12 Jayer lots alone realized £902,000, with a case of Richebourg 1978 setting a world auction record of £211,500, triple the high estimate. As ever, Domaine de la Romanée Conti and Pétrus were in high demand, rounding off a memorable sale – one of the most successful wine auctions ever seen in London.”

By enabling access to auctions, online sales platforms have managed to attract a more international and wealthier clientele. iDealwine.com, the first online auction house dedicated to wine, recorded in 2015 a turnover of £7 million.