The Contents of Pen Moel, near Chepstow in Wales, will be offered by Dreweatts, across a series of auctions running from June through to November 2016.  The first auction comprises the majority of the collection consigned for sale and will take place on 2nd June in the Interiors Sale at Donnington Priory.

Pen Moel (or Pen Moyle) is one of the larger houses in the parish of Tidenham, near Chepstow, and has been owned by Sir Holburt Waring and his family since the 1930s. Previously it was the property of locally renowned philanthropists the Philips sisters who lived at Pen Moel throughout the 19th century. The property was sold to Sir Holburt Jacob Waring, 1st Baronet, CBE, FRCS (1866-1953) in 1935 and has remained in his family ever since.  Sir Holburt was a surgeon at St Bartholom 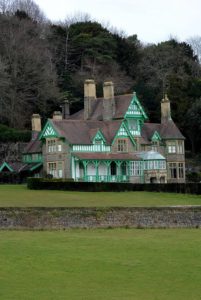 ew’s Hospital, London, Vice-Chancellor of the University of London from 1922-24 and President of the Royal College of Surgeons 1932-35.

The sale of property from Pen Moel provides an excellent opportunity for collectors to acquire works of art that have remained in private hands for many decades. During the valuation some wonderful treasures came to light from Georgian furniture to Japanese bronzes and Dutch Old Master Paintings to Nepalese silver.

The Interiors auction will feature an array of objects from the domestic to the extraordinary.  Leading the sale is a pair of impressively carved and stained hardwood Solomonic columns, 17th century, with putti and birds amongst fruiting grapevines, beneath composite capitals. Standing at 187cm high, they are estimated at £800-1,200. Staying with naturalistic forms, a Scottish Victorian cast iron garden seat is painted in the vibrant green reminiscent of the exterior of Pen Moel. The 19th century seat was cast at the Charles D. Young Foundry and features fruiting grapevines, above a latticed seat, 85cm high, 90cm wide, estimate of £250-350.

Decorative objects include a suite of four late 19th century Chinese blue and white vases, expected to realise £200-300 and a tôle peinte footbath and matching water can, 19th century, painted to simulate oak, with an estimate of £300-500. 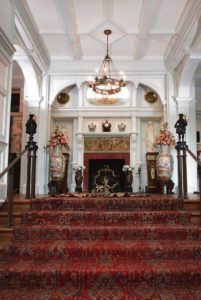 In the same sale a French ormolu and Sèvres style porcelain plaque mounted mantel clock, circa 1870 and later, is offered, the French eight-day bell striking movement stamped R and numbered 275 together with a pair of associated three-branch candelabra with similar plaques to base, each 53cm high and estimated at £1,500-2,000.

An array of paintings are included in the Interiors auction featuring an enchanting family portrait of Lady Annie Cassandra Waring (née Hill) with her son Harold painted in oil on canvas by Edith Fortunée Tita de Lisle (1866-1910), Monogrammed ‘FL DE’ to the lower left and measuring 150 x 100 cm the picture is estimated at £800-1,200.  A dramatic landscape of Chepstow Castle by Hugh Melvill Crowther (1914-2003) might well appeal to enthusiast of the castle museum and its surroundings. Executed in oil on board it is signed and dated 1986 and measures 51 x 70.5 cm, estimate of £150-200.

Items that reflect the interests and pastimes of the family include a preserved model of a Thames Trout, late 19th century, naturalistically modelled and mounted in an ebonized glazed case. Complete with a paper label bearing the family legend ‘Thames trout taken at Boveney Weir 7th June 1891 weight 6 3/4 lbs’ (Est: £300-500).  Also of interest is an Aesthetic Movement ebonised humidor, circa 1890, with painted and gilded panels. Estimated at £600-800, it would cost a fortune to fill it with the required number of cigars today.  Catering for younger members of the family is a painted wood rocking horse on a pine trestle base from early 20th century, 113cm high, 129cm wide and 43cm deep (Est: £400-600). 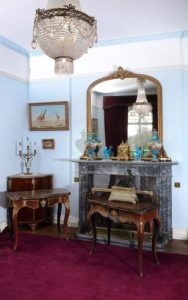 The walls of Pen Moel have long been adorned with an impressive selection of paintings, and a group of these will be offered in the auction of Fine Paintings, 13 July 2016.  Of special interest is a Portrait of a Lady Reclining, illuminated by candlelight by the German Neo-classical artist Anton Raphael Mengs (1728-1779). An oil on canvas, the picture is expected to fetch £20,000-30,000. A work Attributed to the 17th century pioneer of Italianate landscape in Holland, Jan Both, is an important picture and sure to draw attention. Depicting Diana and Actaeon, the painting is estimated at £12,000-18,000.

Property from Pen Moel will also feature in specialist auctions to be held later on in the year. Another discovery is a fine French Empire brass mounted mahogany floor-standing sidereal regulator timepiece, by the esteemed clock maker Henry Lapaute, Paris, dated circa 1810 and estimated at £25,000 – £35,000. This piece will be sold in the auction of Fine Clocks, Barometers & Scientific Instruments, 20 September 2016.

Sir Holburt Waring, 1st Baronet, went to India and Nepal in 1911 to operate on Sir Baber Shamsher Jang Bahadur Rana (1888-1960), second son of Maharaja Sir Chandra Shamsher Rana, hereditary Prime Minister of Nepal. Included in the Asian works of Art sale on 8 November will be a set of nine Indian gouaches of a Hindu festival circa 1820; another smaller; and three photographs related. Two of the photographs are of Sir Baber Rana, the third photograph is of his wife. These pictures made by Indian artists for the British in India are called Company paintings. This set shows the Harihar Kshetra festival at Sonepur, near Patna. Vast crowds have always thronged to Sonepur Mela (fair) to offer obeisance in the Harihar Nath temple and to take part in the cattle fair, the largest fair held in Asia. It takes place in November and lasts for about 14 days. The set is expected to make £4,000-8,000.

Other Asian works of art from the collection range from a monumental Japanese bronze vase and cover standing at 6ft high, estimate of £6,000-8,000 to a pair of important Japanese vases from the Meiji period decorated with a peacock in a peony tree, estimate of £4,000-6,000.