Duke’s Asian Art specialist Andrew Marlborough commented, “It was a very encouraging sale for the Asian market in general. We received a huge amount of enquiries for the sale and there were very few unsold lots. There was strong competition for the Chinese and Japanese things especially, and we received some brilliant prices for the Ghandaran and Indian pieces. All in all, an encouraging sale.” 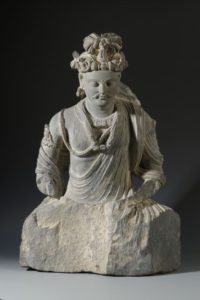 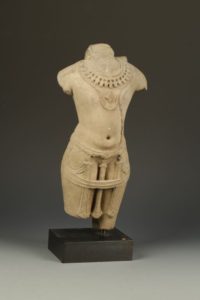 The collection saw 88% of the lots sold, with the top price being £61,000 for a fine Gandharan grey Schist Bodhisattva Maitreya, which saw interest exceed its estimate of £10,000 to £20,000. Elsewhere, an Indian sandstone male torso fetched £6,588 and an Indian black stone stele selling for £7,320. Thai pieces also performed well, such as an unusual and sculptural gilt bronze Buddha hand, circa 16th-17th century, which saw strong interest to beat its estimate of £800-£1500 and sell at £9,150.

A second collection of Lieutenant Colonel Terence Parsons (b.1933) of an old established Dorchester family, featured items from his time in the army serving in East Asia. After his retirement, he took a great interest in the antiques trade, and was employed by Duke’s as a catalogue proof reader for a number of years. His collection contained mostly Chinese ceramics, which all sold well over estimate, with a total of 95% sold. Highlights included a Chinese Wucai covered jar with an estimate of £200-£400, which finally sold for £4,148, and a Ming cloisonné dish’s estimate of up to £2000 eventually sold for £4,800.

The final collection in the sale was that of Lieutenant Colonel J.G. Dunstone MBE, of Amesbury in Wiltshire, purchased from Helen Ling in, Sinapore 1968. Containing a selection of jades, the highest selling lot was a Chinese Qing white jade ‘monkey and peach’ pendant, which tripled its £3000-£5000 estimate to reach £9,760.