A collection of over 600 pieces of silver from one collector is being offered by Surrey auction house Ewbank’s, in June. The collection features silver from many different parts of the world, including Imperial Russia, China, Colonial India , England, continental Europe and America.

The silver has been consigned for sale by the executors of a deceased collector, who started buying about 45 years ago during the late 1970s. The collection began gradually and inexpensively, and was added to over the years. Ewbank’s said that it has carefully lotted the pieces to offer collectors the opportunity of buying small items for relatively modest prices.

Among the first things purchased by the late collector were English silver dog nose spoons, including some dating from the reigns of William III and Queen Anne and buying continued right up until 2014. 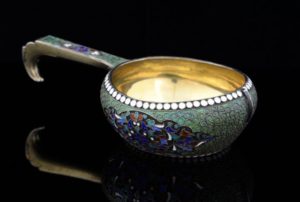 The collector bought at fairs and auctions, taking a particular interest in Russian silver throughout the 1990s. The sale has in excess of 120 lots of Russian silver, including cigarette and snuff boxes, drinking cup holders, and spoons. The vast collection also features more than 40 lots of Indian silverware.

Among lots of note are a pair of George IV English silver salts with gadrooned borders by Paul Storr, of London,1824. Each are on four moulded foliate and paw feet, weighing 7.9oz (245g). They have an estimate of between £600 and £1,000.

London-based Storr (1770-1844) was England’s most celebrated silversmith during the first half of the nineteenth century and his work is still in high demand. His first major work was a gold font commissioned by the Duke of Portland in 1797, and in 1799 he created the “Battle of the Nile Cup” to be presented to Admiral Lord Nelson. 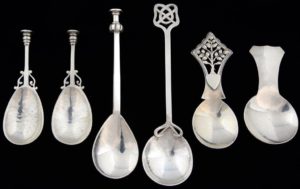 Today, silverware from Storr’s workshops are displayed in Windsor Castle and Buckingham Palace. There are significant collections of his work both in the National Silver Collection at the Victoria and Albert Museum, and the Wellington Collection at Apsley House. Outside London, his works can be found in Brighton Pavilion, the Bowes Museum, Barnard Castle and Woburn Abbey.

Ewbank’s has three works by Sheffield-born silversmith Omar Ramsden (1873 – 1939) consigned for sale within the collection. Ramsden was one of England’s leading designers and makers of silverware in his time, and collaborated for many years with Alwyn Carr (1872 – 1940) in a studio in Chelsea.

After they parted ways, Ramsden used the mark ‘Omar Ramsden me fecit’ which, translated from Latin, means ‘Omar Ramsden made me’. One of the lots in the collection on offer features this intriguing mark: a single-handled beaten silver dish with a diameter of 14.5cm, weighing 126g, made in London in 1928. It carries an estimate of £300 to £500. 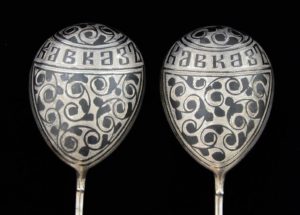 A striking gold and turquoise hat-pin by famous Russian jeweller Karl Fabergé (1846-1920) has been valued at between £300 and £500 by the team at Ewbank’s. It has Fabergé markings and is 56 standard. Fabergé was, and still is, best-known for his highly decorated eggs made of precious metals and gems.

A beaten silver dish by highly-collectable Danish silversmith Georg Jensen has been also been consigned for sale, with an estimate of  £100 and £150. The bowl is 10cm wide, weighs 1.5 oz (48g), and carries English import marks; its border is decorated with flowers. There are three other Jensen lots of caddy spoons and another, a set of teaspoons.

Two silver dog nose spoons by John Cory are available for sale, so-called because of the shape of the handle of the spoon, a wavy end which narrows to a rounded point – resembling a dog’s head when viewed from above.

Another silver spoon of interest within the vast collection is one made for Tiffany & Co, weighing 1.1oz (35g), carrying maker’s mark ‘AK’, 88 standard, 1886. It has an estimate of between £200 and £300 and is a Russian silver gilt and champleve enamelled spoon. The reverse of the bowl has a scrolling floral decoration.

Among the many Russian silver lots available is a 4.4oz (139g) silver cigarette case with engine turned and engraved decoration, assayed in St Petersburg, bearing the marker’s mark ‘KB’. estimated £80 and £100.