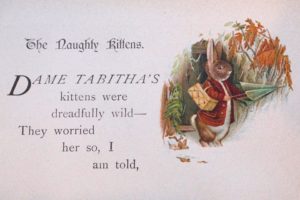 Chiswick Auctions has discovered a previously unrecorded illustration by a youthful Beatrix Potter in one of the lots in its sale of Printed Books and Manuscripts on Wednesday 25th May.

Lot 275 includes a small group of four children’s books published by Ernest Nister (c 1894). One of the four books entitled, Pleasant Trips by Trains and Ships, contains a printed image by the budding author of a rabbit in an oval illustration, which, according to the auction house, “bears a remarkable resemblance to a certain Benjamin Bunny.”

Potter’s first book, The Tale of Peter Rabbit was not published until 1902, followed by 1904’s The Tale of Benjamin Bunny, making the illustration a very early example of her work as an illustrator.