On the 11 June as part of the Specialist Modern & Contemporary Print auction Roseberys London is offering a series of candid and intimate photographs of the late Pablo Picasso. The twenty four images are from a private collection by late the French photographer Andre Villers, (1930-2016). 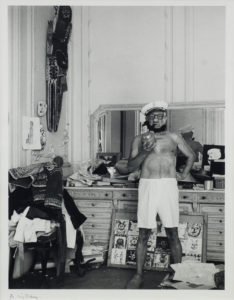 Villers, who passed away on 1 April 2016, discovered photography whilst recovering from severe Tuberculosis. He first met Pablo Picasso in Vallauris in 1953 which was the start of a lifelong partnership, producing many photographs of Picasso at work and later more experimental cubist style works.

In late 2015, just months before Villers passed away The Gagosian Gallery (Geneva) presented Villers | Picasso; An exhibition delving into the creative collaborations of these two great men and presenting Villers latest and last work.

The exhibition was  ‘Bringing together photographic works, sculptures in paper and cut-out metal, and paintings, the exhibition presents a fresh perspective on the fertile dialogue and friendship between the two artists. It explores a unique occurrence in Picasso’s oeuvre: Villers was the only photographer who Picasso fully integrated into his creative process, although he worked with many others, including Man Ray, Dora Maar, Brassaï, and David Douglas Duncan.’ Gagosian Gallery

The two men equally fuelled and inspired the others work, with Villers continuing to expand on their initial ideas up until the time of his death earlier this year.

His final works took the form of small sculptures crafted from paper, scissors and fragments of images from old masters, these were restructured into collages, he then poses and photographed digitally – This being the latest evolution of his mixed-media inventions with Picasso.

The series of photographs are a rare glimpse into the life of one of our most important figures in art history.

Included in the selection of prints are the following highlights:

These works are featured in Roseberys London 11 June Modern & Contemporary Prints, Photography & Multiples Auction that features 350 lots by sort after and collectible artists.