The Collection of the late Reg Humphris, the brother of the renowned sculpture dealer Cyril Humphris, is to be sold at Duke’s of Dorchester on June 9th. 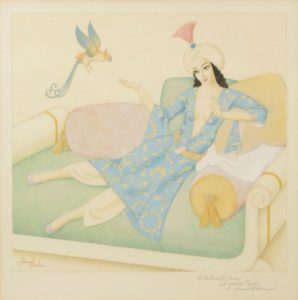 Reg’s personal collection is testament to his eye for quality and includes Iznik ceramics, English watercolours from the 18th century, and sculpture.

Reg enjoyed making discoveries, but as a serious collector he was equally content to buy watercolours from leading dealers. Indeed, his annual pilgrimage to Agnew’s Watercolour Exhibition is documented on the old labels attached to the reverse of many of his acquisitions. There are two works by Samuel Hieronymous Grimm (1733-1794), one depicting Blackwell Church, Derbyshire, and the other a view of Beauchief Abbey. They are both in superb condition. Later watercolours include one of an Oriental beauty reclining on a couch by Edmund Dulac (1882-1953), which carries a conservative estimate of £500-£1,000. 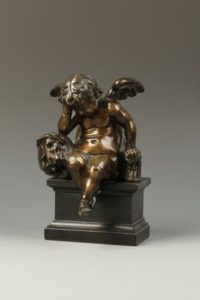 The sculpture on offer includes a bronze bust of Lord Byron, which is likely to attract passionate bidding. Although Reg was well-known for his research and academic approach, he does not appear to have completed delving into the history of a fascinating bronze in the auction, which may prove to be something of a ‘sleeper’.

L’Ange Pleureur is a bronze of a cherub leaning on a draped skull, which relates directly to part of a monument by Nicolas Blasset (1600-1659). The marble monument dedicated to Guilain Lucas can be found in the Cathedrale Notre-Dame d’Amiens completed circa 1636. The marble angel on the monument was damaged in 1793 when a Belgian officer struck it with his sabre and damaged the nose and foot.

The bronze measures 8.5” high and the facture and finish are entirely consistent with a 17th century date. This may indicate that it was cast prior to the execution of the monument, or it may have been derived from it. The bronze carries an estimate of £1,000-£2,000.