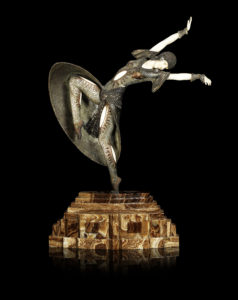 The sale offers two further important pieces by Chiparus, Les Amis Toujours, a large painted gilt-bronze and ivory sculpture, also from the mid-1920s estimated at £35,000-45,000 and, from the same era, The Clown’s Dream, a large gilded bronze and carved marble study estimated to sell for between £30,000-40,000. 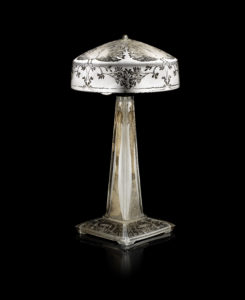 Demetre Chiparus (1886-1947) was born and raised in Romania but spent most of his life in Paris where his sculptures of the 1920s came to embody the spirit of the age.  Drawing on such influences as Serge Diaghilev’s Ballets Russes, the burgeoning art of the motion picture and, after the unsealing of the tomb of Tutankhamun in 1922, the world-wide craze for all things Ancient Egyptian, Chiparus’s work evokes the heady excitement of the Roaring Twenties.

Mark Oliver said, “In a very strong and select sale of more than 100 lots these three works certainly stand out. We are also, however, offering notable pieces by his close contemporary Ferdinand Preiss; The Butterfly Dancers, a rare sculpture by Dr Otto Poertzel estimated at £25,000-35,000; and Paons, a beautiful and very scarce early glass table lamp by René Lalique dating from 1910 and estimated at £20,000-25,000.”