With the BBC’s new costume drama Versailles hitting our screens – instantly setting pulses racing with its heady mix of sumptuous wealth, intrigue and romping passion – here’s our Top Ten list of antiques and inspiration from the era of France’s King Louis XIV. 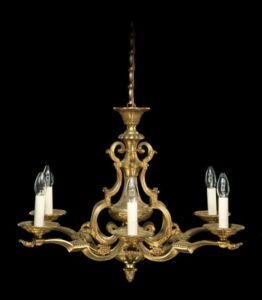 This Louis XIV revival chased brass six light chandelier is being sold by Reindeer Antiques. The ring suspension is above a central urn stem supported by scrolling strapwork decorated with acanthus leaves from which scrolling candle arms issue and terminate in dished drip pans. 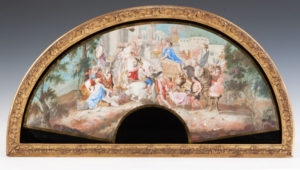 This Louis XIV fan leaf for sale by Walpoles is finely painted with a design illustrating the ‘Triumph of Alexander’, when Alexander the Great entered Babylon, having defeated the Persian King Darius III. This design, painted in gouache and probably on vellum, is taken from one of a set of five paintings Charles Le Brun created for Louis XIV between 1661 and 1668. It is set within a fine carved and gilded gesso frame with a Verre églomisé mount. French circa 1700. 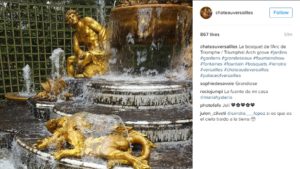 Soak up the atmosphere of Louis XIV’s resplendent royal palace with a trip to Chateau Versailles, south-west of the French capital. Find out about organising your trip on the historic site’s website and get a taster of what you’ll see there on the Versailles Instagram page, such as this shot of Le bosquet de l’Arc de Triomphe. 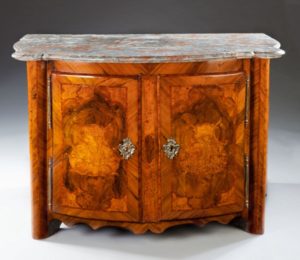 Pack your valise and head to the home of Versailles for some antique hunting. France is a recognised hotspot for antiquing with its calendar of regular markets, brocantes and fairs. Join an organised tour by the likes of the Antiques Diva to get some insider secrets on how to secure that Louis XIV gold-leaf chair. 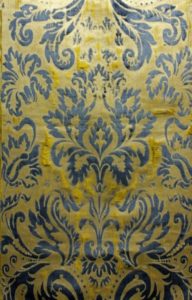 This Louis XIV cut velvet panel (left) was woven in Lyon during the 17th century and retains all of its beauty and vibrant colours to this day. Woven in silk on a golden yellow ground it is decorated with large acanthus leaves and palmettes in powder blue. The panel is offered by Joanne Booth. 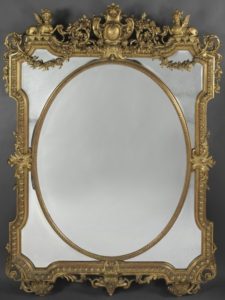 Made in c1890, this finely carved carved giltwood and gesso Louis XIV style marginal frame mirror (right) has an oval mirror plate within a beaded surround, framed by marginal mirror plates and a re-entrant rectangular frame with egg and dart moulding. The mirror is surmounted by a garland draped cresting centred by a ‘C’ – scroll cartouche and flanked by recumbent sphinx. The mirror is offered by Adrian Alan Antiques.

Missed the first episode of Versailles? Don’t get your ruffles in a twist, but catch up now on the BBC iPlayer. 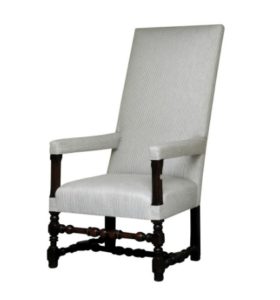 Claim the right to your own throne with this large oak armchair (right). The chair has an upholstered back and seat, baluster turned and chamfered supports. France, Louis XIV, circa 1700, it is for sale by Kate Thurlow. 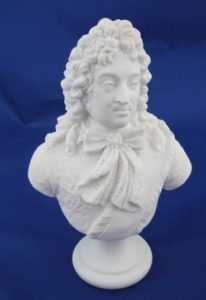 This early 19th century finely sculptured bisque porcelain Sevres bust features the man of the moment: King Louis XIV. The bust is mounted on a circular socle, and incised AB on the reverse 4 – Nov – no 2. The Bust if offered by Mary Wise & Grosvenor Antiques on the BADA website.