Cambridgeshire’s Cheffins is to host a two-day Fine Art sale on 15th and 16th June, which will include a new section entitled Dogs in Art. We caught up with expert Martin Millard to sniff out the inside track on canines in artistic creativity.

Which dog artists are currently highly sought-after and why?

John Emms, Maud Earl, F. T. Daws, Arthur Wardle, Sir Edwin Landseer – to name a few – these were the very best canine artists of their day and their works are still widely appreciated and keenly sought by both collectors and breed specific enthusiasts around the globe.

What is it about their style that appeals? 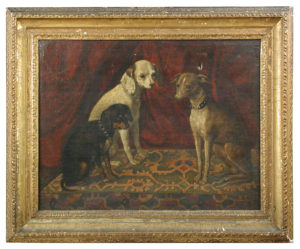 True to life depictions, often with softer expressions make these amongst the most appealing.

Is there a particular breed of dogs in paintings that are always in demand?

Like all things, this is led by fashion – gundogs have always appealed, but also any particular breed that happens to be fashionable at any one time can drive prices up for an artistic work depicting said breed.

Are there a specific group of collectors who seek out dog portraits? 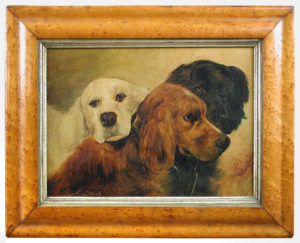 It isn’t always about dog portraits, but often it is works that incorporate dogs, in particular depicting them at work.  Many people have an interest in a particular breed because they own one themselves, either as pets, working dogs or show, or indeed, a combination of the above.  Many of the interested parties like to examine the development of a particular breed, as many dogs from even just 100 years ago are almost unrecognisable by today’s standards.

Is there a celebrated era in dog portrait painting?

Man’s best friend has appeared in art for as long as they have been man’s best friend, however, it was relatively recently in the 19th century when the dog in art first becomes a major subject, driven by the traditions of sporting art, and reflecting the major increase in both the numbers of breeds and the interest in the breed standards.

What symbolism do dogs have in art?

What dog paintings should we be looking out for? 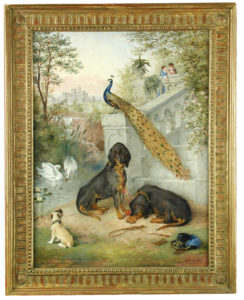 Something that you like!  At the end of the day, we have to live with these things, and the best advice I can offer anyone is to buy the best you can afford (ie, by a good artist with a proven track record on the secondary market), but also something that you want to look at every single day!

Dogs or cats in art – which one wins the fight?

It probably depends on who you ask!  But dogs probably have a better pedigree (excuse the pun) when it comes to their  representation in art, and as a dog owner myself, there can only be one winner!

Which dog picture would you most like to own?

The kennel club have a world class collection of canine art, and my ‘pick’ changes from one visit to another!