An exceptional early self-portrait by the man regarded as the first truly significant British painter, William Dobson, is to be sold at Bonhams Old Master Paintings sale in London on 6 July. It is estimated at £200,000-300,000. 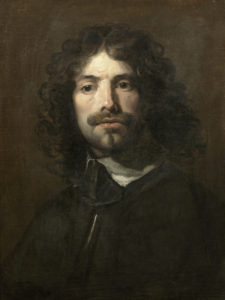 Self Portrait of the Artist, together with its companion piece, a portrait of Dobson’s wife, are the earliest known works which can confidently be attributed to the painter. During his short but eventful life, Dobson enjoyed meteoric success before plunging into poverty and an early death in 1646 at the age of 36. The son of a moderately successful but dissolute decorative artist, also called William, Dobson seems to have inherited his father’s rakish genes  – he was described 60 years after his death as, “somewhat loose and irregular in his way of living.” His self-portraits, including the present one, certainly suggest a zest for life.

Writing in the summer 2016 edition of Bonhams Magazine, the art historian and broadcaster Waldemar Januszczak said, “He was of particularly English stock, and it gave his art a particularly English flavour. You can see it immediately in this rare self-portrait. The direct pose. The expectant face. The gauche confidence of the thick splodges of impasto. These are new qualities in art: English qualities.”

Until the late 1630s, Dobson enjoyed a modest career. Two events conspired to catapult him to fame and fortune. The death of the Court Painter, Anthony van Dyck, in 1641 and the outbreak of the English Civil War the following year. On Van Dyck’s death, Dobson was appointed his successor, the first native-born artist to hold that position. In 1643, when the progress of the war forced Charles to move his court to Oxford, Dobson followed. Over the next two and a half years he painted the portraits – more than 60 survive – that created the image of the doomed, romantic, Royalists which persist to this day. These swagger portraits of dashing young cavaliers in the latest finery stand in marked contrast to the images of their sober suited Roundhead opponents.

Dobson’s style was characterised by vigour and vitality, technical flair and the truthfulness of his depictions. This represented a break with the Van Dyck school of portraiture and its tendency to flatter. His importance was recognized early. The antiquarian and author of Brief Lives, John Aubrey (1626-1697), described him as “the most excellent painter that England has yet bred.”  In the words of Waldemar Januszczak, “Dobson’s face should be on our banknotes.  His name should be on all our lips.”

When Oxford fell to the Parliamentarians in June 1646, Dobson’s star fell as rapidly as it had risen. Deprived of royal patronage, he found himself out of favour, endured a spell of imprisonment, and died in poverty in October of that year.

Bonhams Director of Old Master Painting, Andrew McKenzie said, “It is difficult to overestimate the rarity and importance of this work in the history of British art. William Dobson was the nation’s first true home-grown master. Before him, art in this country was dominated by painters from overseas and it was Dobson who gave painting in Britain its national character.  Not until Hogarth more than seventy years later could we boast such a distinctive and important artist.”