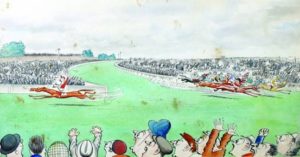 With the Epsom Derby still fresh in the memory, John Nicholson’s Fine Art Auctioneers is hoping that auction-going fans of horse racing will want to come out in front when bidding on a signed cartoon by HM Bateman – The Favourite Who Took the Wrong Turning at Tattenham Corner.

Bateman, doyen of early 20th century British social satirists, was renowned for his celebrated The Man Who… series of cartoons, devised while working for The Tatler in the 1920s and ’30s.

The celebrated series was built around the concept of British gaffes and faux pas, which are enjoying a huge resurgence among collectors of the genre, with several big prices already registered at auction this year.

John Nicholson’s of Fernhurst in West Sussex has developed a particular reputation for securing key Bateman works for its fine art auctions. This signed and inscribed 13¼ x 19½in watercolour, which was included in an exhibition at the distinguished Leicester Galleries in London in 1974, carries an estimate of £4000-6000 in their June 15 sale.