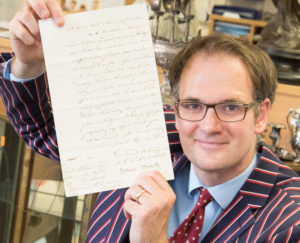 An original letter, written on board HMS Victory by Admiral Lord Nelson, which gives a remarkable insight into his writings of tactical and strategic skills, is to be auctioned by Hansons Auctioneers in Derbyshire on Friday 1st July.

The letter, uncovered by Charles Hanson Managing Director of Hansons Auctioneers, captures the heroic nature of the celebrated seaman. Victory at the Battle of Trafalgar in 1805 resulted in British supremacy at sea, the basis of her global power for over a century, though it cost Nelson his life. 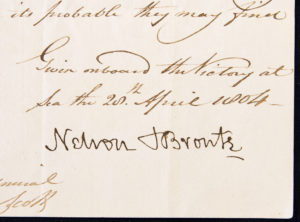 Mr Hanson remarked: “Horatio, Lord Nelson, is still acknowledged 200 years later, as our greatest naval tactician and as a man of tremendous audacity and courage who showed little concern for his own. He had lost the sight in his right eye at Corsica and lost his right arm at Santa Cruz de Tenerife and had suffered a very severe head injury at the Battle of the Nile.”