Dreweatts & Bloomsbury Auctions will host a sale of Fine Jewellery, Watches, Silver and Objects of Vertu at their Donnington Priory base in Newbury, Berkshire on Thursday 14th July. The sale will feature a selection of precious objects dating from the 17th century to the late 20th century. 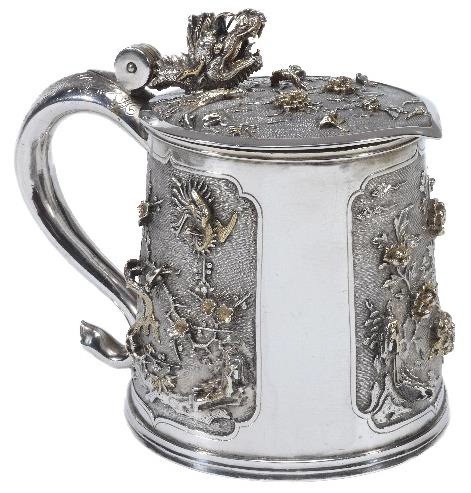 Examples include a silver tankard, with an estimate of £15,000-£25,000, in chinoiserie style is a highly important and exceptionally rare piece of silver that is possibly thought to be the only known example in existence. Chinoiserie was a decorative style that was inspired by the art and design of China, Japan and other Asian countries which was at the height of fashion in the 18th century and hugely popular with British designers and craftsmen.

This exquisite tankard, circa 1685 and unmarked apart from an 1814-1893 Dutch tax/census stamp, forms part of a small known group of silver dating from the last quarter of the 17th century with Chinese decoration in relief. The design on the tankard features a striking Chinese dragon thumbpiece and engravings of Chinese style flowers and foliage.

Analysis carried out on the tankard found the silver impurity levels consistent with it being 16th-17th century and of sterling (.925) standard, thus pointing to an English, rather than Chinese, origin. As far as the present cataloguers have been able to ascertain there is no other example of a tankard from this very rare group in existence today.