A unique collection of six artistically decorated wooden panels made by the survivors of war-torn Berlin in 1946 will be an important historic attraction when they go on sale at the forthcoming Antiques for Everyone fair at the NEC, Birmingham, from 21st – 24th July 2016. 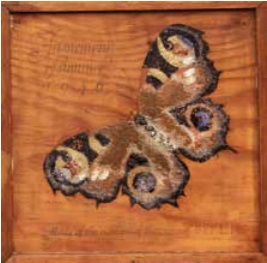 Each panel is constructed from reclaimed wood from buildings left devastated at the end of the war. Each is decorated with the symbolic image of a colourful butterfly assembled from tiny pieces of enamel tiles and brickwork collected from the remains of well-known buildings. They were made by the local survivors of the artistic community in 1945-46, who had no access to traditional painting and media materials, and wished to express their hope for a new life in the aftermath of war. They are not signed but each is numbered and now considered to represent an underground art movement that was emerging from the chaos of the German capital.

The panels belong to antique dealer and regular exhibitor John Shepherd of Hiscock & Shepherd from Kent. John has assembled these extremely rare mementoes of World War II over the past ten years. Various items within each panel have been identified. The light-blue colour of the butterfly is made from the tiles of a fine delicatessen store on Potsdamer Platz and the red brown coloured pieces from the bricks of an old building of Wilhelmstrasse.

John explains: ‘These butterfly works are no precious works of art but their story is very moving. Those who made them believe that they are right to impart a positive message: that nothing is so ugly that it would be impossible to make something good of it.

On the back of each panel is a typed page of paper with the text: When the battle of Berlin was over, they met again, just a small group of friends: some painters and designers, and a woman well acquainted with all kinds of fancywork. They looked around and none of them said a word. What should they say, what did they feel facing the dead under blooming lilacs and the smouldering ruins of their beloved town? With the churches burnt out and their old windows beautifully coloured gone to pieces, the bridges fallen down into the river, the rails bent and the trees burst, with mountains of rubbish barring the streets once full of life. What should they do looking at a chaos like this that seemed to have put an end at last to a long but wrong way? Life must go on. It broke the silence. One of them said, they ought to make something of the rubbish that was left. But what?

One similar panel was donated to the United States Holocaust Memorial Museum in 1933 where it can be found today. Each panel will be on sale for £120 on the stand of Hiscock & Shepherd.

Antiques for Everyone brings together dealers and collectors from across the antiques market. Featuring exhibits totalling more than £10 million, this is a major event for collectors, art enthusiasts, interior decorators and anyone with an interest in the fine and decorative arts. The fair offers more than 200 specialist dealers, divided between two separate sections, with prices ranging from less than £20 to more than £20,000.

“The fair is recognised as an important event attracting both trade and private buyers from the UK and abroad,” explains Fair Director Mary Claire Boyd from Clarion Events. “Visitors are enticed by the wonderful selection and diverse range of pieces available to buy, giving them the opportunity to delve into a treasure trove of inspiring craftsmanship and fabulous design.”

2 thoughts on “Unique panels at Antiques for Everyone”