An exhibition of the eccentric and idiosyncratic ceramics from Martin Brothers potters (1873-1923) is to go on show at the National Trust’s Standen House and Garden in West Sussex. 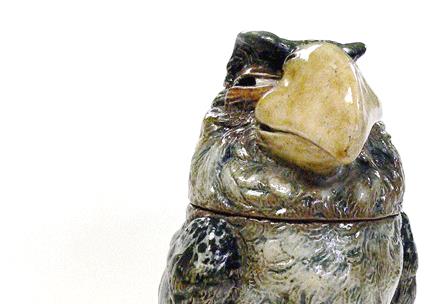 The work of the inimitable Martin Brothers has inspired both outright devotion and the raising of eyebrows by critics and collectors for decades. With their distinctive Wally birds, the Martin Brothers have made their mark on the world of antiques, forging their way into the hearts of the British public over Sunday night tea in the Antiques Roadshow.

This mini respective exhibition by the National Trust at Standen, however, takes the debate around these distinctive potters one step further. It proposes that the Martin Brothers were pioneers who shaped the development of British studio pottery.

House Manager, Ben Dale is enthusiastic about the exhibition, saying, “The sense of mystery, menacing and intrigue is unmistakable. This exhibition celebrates the work of these remarkable craftsmen, looks at what influenced and inspired them and their impact on the development of Art pottery.” He quotes Bevis Hillier from Malcolm Haslam’s definitive book on the potters: “The Martin Brothers must be considered among the great British artist-craftsmen, not just the endearing freaks they have too often been considered.” 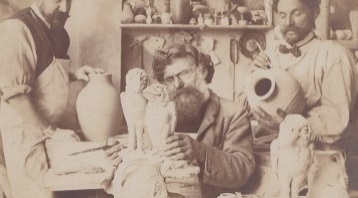 To make the case, the exhibition brings together works from the collection at Standen, with loans from UK collections including the Hull Grundy Collection from Ealing Council (previously at the Pitshanger Museum), the Royal Albert Memorial Museum in Exeter, Holburne Museum in Bath, modern day ceramics by Burslem Pottery and historical pieces owned by the National Trust at Blicking Hall and Greenway, amongst others. The public are asked to respond by stacking their comments on boards above a salvaged potter’s wheel and to enter a theatrically lit display of Wally birds.

Standen is a fascinating backdrop to all this high pottery drama. An exquisite house, it was designed by Philip Webb (architect and lifelong friend of William Morris) in the 1890s for the Beale family. It is a fine example of Arts and Crafts workmanship with Morris & Co. furnishings and has its own collection of Art pottery. The gardens have been undergoing a dramatic revival in recent years and they play host this Autumn to a newly commissioned contemporary art series with residencies by Will Shannon and designer Kaffe Fassett.

While a small exhibition, it captures the brothers’ sense of fearless experimentation. Standen’s curators are not alone in admiring the eccentric Englishness of their output. The exhibition will be opened by David Battie of the Antiques Roadshow, who said, “After six months as a porter in the ceramics department at Sotheby’s, I still hated pots. Then in came a Martin Brothers Bird Jar – and I was a convert. Trying to fire a stoneware kiln was, at best, risky. When the output resulted in only a few perfect pots, you have a Greek tragedy. Salt-glazed stoneware, whose claim to fame had formally been as sewer pipes, in the hands of the Southall Three was transformed into objects of humour, beauty and utility.”