Star Trek fans should boldly go to Ewbank’s ‘Entertainment and Memorabilia’ sale on September 6, to be in with a chance of buying the costume worn by Leonard Nimoy as Spock in the first Star Trek film, Star Trek: The Motion Picture, released in 1979.

The film was the first in the ongoing franchise, with the thirteenth edition due to be released in the coming weeks in the UK. Leonard Nimoy sadly passed away before filming of the new movie began. This year is the 50th anniversary of Star Trek’s inception.

Chris Ewbank, senior partner at Ewbank’s, said: “Nimoy’s Spock is one of the truly iconic characters of television and film, and to have his costume from the first-ever Star Trek film on sale is incredibly exciting. We are expecting a lot of interest from buyers in the UK and overseas.”

The Nimoy Spock costume consists of a panelled long-sleeved jacket with a zip at the back, and matching grey trousers with shoes attached to the trouser legs. Both items display Western Costumes labels typewritten with production numbers and name, and are sold with a certificate of authenticity. The costume has been given an estimate of between £12,000 and £15,000.

There is a Starfleet insignia patch sewn onto chest of the jacket, gold ranking braids on sleeve cuffs, and a ‘perscan’ medical monitoring device attached to an integral false belt on the front. The device is mentioned in Gene Roddenberry’s novelisation of the film.

Alastair McCrea, Ewbank’s entertainment specialist, commented: “The starship Enterprise crew’s uniforms were redesigned for the film, as it was feared the bright colours of the costumes from the original 1960s TV series would have distracted viewers when watching the movie on a large screen. However, the designs proved unpopular and when Harve Bennett took over as producer for the second film, he redesigned the uniforms.”

The Spock tunic is one of many fascinating lots for sale in the Entertainment and Memorabilia auction. Another high-profile costume is from the 1984 film Indiana Jones and The Temple Of Doom.

A red robe from one of the Thuggee Guards, who work in the temple and mines below Pankot Palace in the movie, is on sale, valued at between £1,500 and £2,500.  The robe is red with black edging and detailing, and is fastened with a button at the collar and ties near the waist. It bears a Berman’s & Nathan’s costumier label stitched in at the collar. 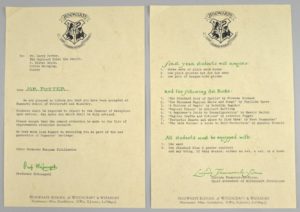 Another movie prop in the sale comes from the first Harry Potter film, Harry Potter and The Philosopher’s Stone (2001). Ewbank’s is putting Harry’s two-page acceptance letter from Hogwarts School of Witchcraft and Wizardry under hammer, with an estimate of between £300 and £500.

Original Tom Chantrell prototype painted artwork for the horror film Terror (1978) has been consigned for sale and given an estimate of between £200 and £400. This conceptual design (minus the dagger) was commissioned for the final artwork for the Quad poster, it measures 16 by 21 inches.

Other lots of note include a signed A Kind Of Magic album by Queen. It is signed on the front by band members Freddie Mercury, Brian May, John Deacon and Roger Taylor. It has a certificate and matching numbered hologram from Rare & Signed, dated June 2016, with an estimate of between £400 and £600.

Football fans will delight in the chance to buy a nine carat gold Herts County Cup Football Winners medal awarded to Watford Rovers’ C.H. Peacock for the 1891-92 season. It was awarded on April 2 1892 at Hare, on the day that Watford Rovers beat Hoddesdon 5-2. The medal has been valued at between £400 and £600.

A limited edition print by renowned musician Peter Gabriel of Storm Thorgerson (1944-2013) has been given an estimate of between £300 and £500 by the team at Ewbank’s. Thorgerson was an English graphic designer, best known for his work for rock artists such as Pink Floyd, Led Zeppelin, Nik Kershaw, Black Sabbath, Scorpions and Peter Gabriel. It is signed, titled and numbered in the margin, framed, measures 19 by 19 inches.

The first is a set of four by H.M. Bateman, valued at between £1,500 and £2,500. They bear the slogan “Don’t Be Fuel-ish Wasted Power Means Less Fuel To Make The Weapons We Need For Victory” and were issued by the Ministry of Fuel and Power. They are folded and each measure 20 by 30 inches.

The other lot consists of two “Back Them Up!” posters. One depicting ‘A British “Commando” raid on a German-held port in Norway’; and the other a ‘Heavy “Stirling” bombers raid the Nazi Baltic port of Lubeck and leave the docks ablaze’ by Roy Nockolds, Both printed Fosh & Cross London, both originally folded, each measures 30 by 20 inches. They are estimated at between £500 and 800.