Classic brands were much in demand in the latest The Designer Collection auction at Fellows in Birmingham, where auctioneers hammered down over £100,000 of luxury lots. 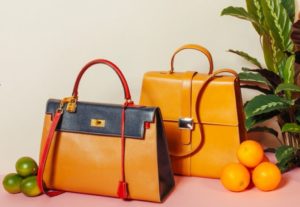 The heritage of Hermés continued to attract bidders with the top five sales all featuring the classic Birkin. A blue ostrich leather Birkin 35 handbag was the star of the show reaching a hammer price of £7,500 whilst the classic brown and burgundy shades all followed in hot pursuit. The top five hammer prices totalled over £26,000.

Elsewhere, Louis Vuitton generated £28,860 worth of the hammer price. The Monogram items consistently sold well but it was the slightly more unusual shaped Monogram bags which attracted bidders to pay higher than the estimated price. A Monogram Montsouris backpack sold for £320, a Monogram Odeon PM crossbody bag sold for £260 and a Monogram Delightful MM hobo bag sold for £170.

Adding a splash of colour to the classic brands was definitely appreciated by bidders with purple hues being the colour of choice, such as a Monogram Vernis Alma PM handbag by Louis Vuitton in a bright lilac smooth patent leather trim which sold for £420.

Accessories across the sale sold well but Hermés stole the show. Hermés scarves sold with an average hammer price of over £100 and two Hermés reversible logo buckle belts each sold for £260.

Age of the items didn’t faze bidders with a 1970s tricoloured vintage Kelly handbag reached its top estimate of £1,800.