Highest Price of the sale was £40,000 paid by an anonymous UK buyer for Sir Lawrence Gowing’s Mare Street, Hackney. 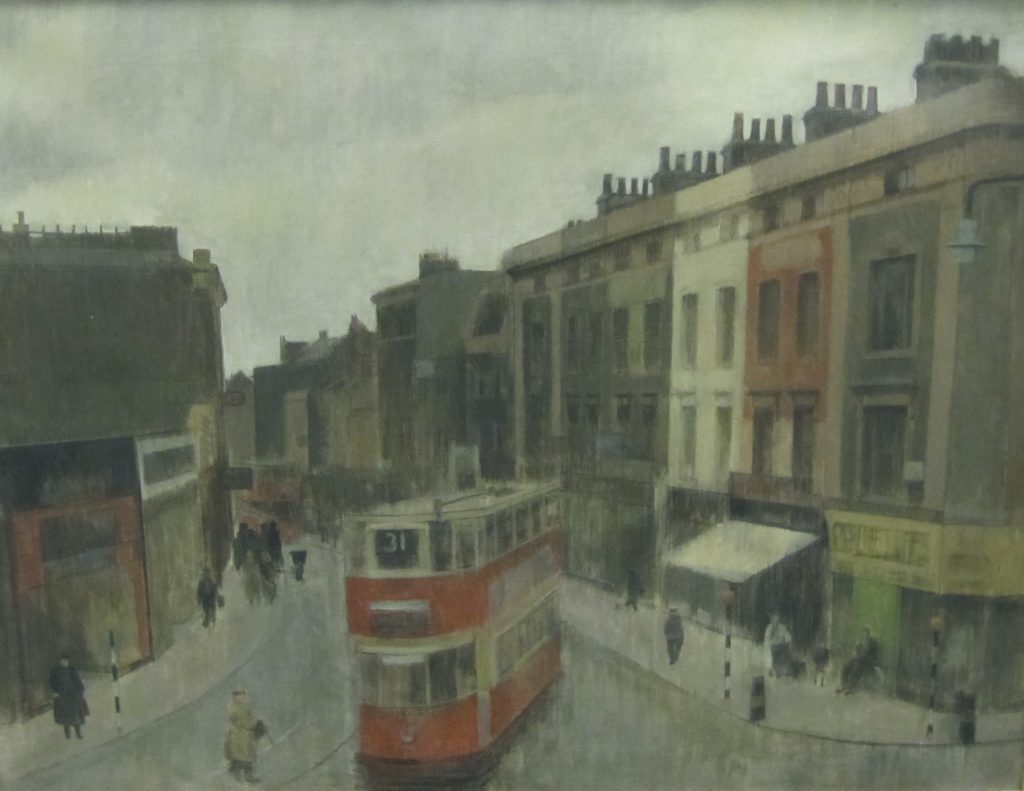 The price represented a new auction record for the artist. The painting, an important example of the Euston Road School was painted in 1937/1938 while Gowing was a still student at the school. Since that time it had been exhibited widely, including in the 1987 Royal Academy Exhibition, ‘British Art in the Twentieth century’.

A London dealer paid £22,000 for a ‘Connemara Landscape’ by Sir Cedric Morris. This work was a fine example of the artist’s work dating from the late 1930’s.

Amongst the watercolours it was an album containing 139 drawings and watercolours by James Wathen (1751-1828) that attracted the most attention. The drawings depicted views along the River Wye and included views of Hereford, Monmouth and Builth Wells and were variously dated from 1794-1814. The album was purchased by a private Herefordshire buyer for £17,500.

The new Oriental Art section of the sale was also well received, with objects from China, India and Japan all finding buyers.

A delicate Chinese porcelain bowl, painted in blue and white, from the reign of the Daoguang emperor attracted strong interest, eventually selling to a Hong Kong buyer for £18,000.

An interesting 17th Century mother of pearl dish from Gujarat in Western India also excited buyers from the US, UK and Europe. These rare objects were made for both local Mughal courtiers and for Portuguese merchants who brought them to Europe where they were used by courtiers as exotic gifts. Despite the dish being of smaller size, it still achieved £8,800 to a Portuguese buyer.

Two lots from Japan exceeded their pre-sale estimates as well. A small gold lacquer and shibayama-inlaid box and cover, in near mint condition despite having been made in around 1900, made £2,200 to phone bidder in the UK. A rare black and gold lacquer kazaridana (tiered stand) was linked with provenance to Prince Konoe Tadahiro, an important noble in the late Edo period. He gave it to Abraham Osler, chief designer and son of the founder of the F & C Osler glass and lighting company in the 1870s. It achieved £1,150.

The silver trade was strong and there were several highlights, but most notably a James I silver Chalice and Paten, which was referred to in The Church Plate of Breconshire (1912). Hotly contested for and eventually purchased by the Brecknock Museum & Art Gallery for £9,000.

In the sale’s jewellery section, a heavy gold graduated Spiga chain necklace achieved well above its estimate to make £5,000.

Pieces painted by the popular artist Harry Stinton were the highlight of the ceramics section, with the hammer falling at £2,500 for a cased set of Royal Worcester coffee cups and £1,900 for two Royal Worcester Vases, both painted by the artist with highland cattle. Two Nantgarw dishes also well exceeded their estimate selling for £1,350 and £1,600.

Elsewhere, an antique carved stone Garden Urn, with interesting provenance made £5,200, while an 18th Century Marquetry Lace Box topped the furniture section, selling to a local collector for £8,400. Other good results include a William & Mary Longcase Clock, which again sold to a private collector for £6,600, a fine gilded centre table for £3,100 and a Georgian mahogany breakfront secretaire bookcase, selling well above estimate at £4,000.