A decorative belt buckle dating from the 7th Century, unearthed by a late metal detectorist a decade ago, is to be offered for sale at London’s Chiswick Auctions next month. 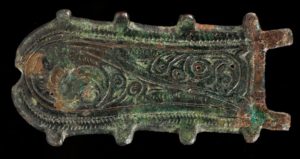 The Anglo Saxon buckle was unearthed by metal detectorist, William Welsh Robson (1944-2012), in London in 2006 and was immediately authenticated by the Museum of London. The copper alloy buckle is particularly rare, as it is only the second one of its kind to have ever been found in England.

The buckle is in the Byzantine style, which overtook the traditional Visigothic forms of costumes and jewellery from the late 6th Century onwards.  Another unusual thing about the piece, is that it would typically have only been found in southern Spain or Portugal, which implies that the original owner could have been a foreign visitor or migrant to England.

The buckle itself would have been attached to a tongue and loop strap with an iron pin, which was a belt-fitting that held up continental garments until the Islamic period. The highly detailed decoration on it, which would have been further enhanced by gilding, possibly in gold, suggests that the wearer may have been a tribal leader, or someone of great importance. 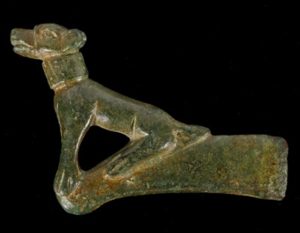 While the buckle went on display at the Museum of London soon after its discovery, it has never been offered for sale, until now, when it is to be featured as a highlight of Chiswick Auctions’ Antiquities and Tribal Art sale on 14th September.

The buckle is part of an array of more than 100 other significant finds by Robson to be offered at auction, which carry a total estimate of £1,000-£1,500.

Claudio Corsi, Chiswick Auctions Antiquities & Tribal Art specialist, said: “This very special selection of items offers a cross section and fascinating insight into London and its surroundings, from the Bronze Age, through to the Medieval period.

William Welsh Robson was the epitome of a respectful metal detectorist. In valuing and operating within the code of practice of the DCMS-funded Portable Antiquities Scheme, (officially initiated in 1999) and by referring all finds to the Museum of London, he has directly contributed to the retention of archaeological archives and records of historical pieces for current and future generations.

The buckle in particular is an extraordinary find. To discover one of only two pieces of its kind ever found in England is awe-inspiring.”

Other pieces include a Roman copper alloy handle decorated with a figurine of a dog, believed to be a wax spatula, which dates from 100-250 AD.

The three dimensional seated dog rests his feet on the tip of the handle and his short tail extends up to the handle. His fur is represented by grooves radiating from the head, down the spine. It is believed that when the blade broke on spatulas, handles such as this, were kept as amulets or votive offerings. 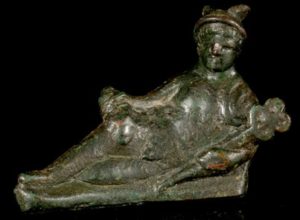 A striking late Bronze Age copper alloy pin dating from circa 1000-800 BC is adorned with striking engraved patterns. Diagonal lines extend along the length of it, with a section of four repeating patterns of herringbone motifs and a linear border. Pins were used for decoration and adornment, but the perforated section in the middle of this pin, suggests it might have been used for sewing.

Among other pieces is a charming copper alloy figure of a reclining Mercury, dating from AD 43-410. The fine detailing is still intact, with clever engraving of the figure’s winged traveller’s hat and staff. He also has some draped cloth over his shoulder and down his left side on the reverse. Its’ metal base is slightly toughened compared to the rest of the figure, which indicates that it was originally attached or mounted on something.