A Toys, Models and Collectables Sale held by Tennants Auctioneers earlier this month reached a hammer total of £43,220 for the 287 lots on offer. 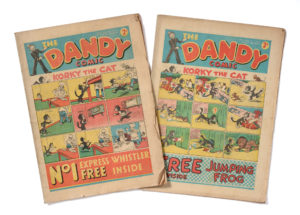 Taking the top spot of the sale was one of only two lots of comics, the Dandy Comic No.1 Korky The Cat, with another. The comics albeit in fair condition reached a hammer total of £3,200, well surpassing its £400-600 pre-sale estimate.

Kegan Harrison, Specialist Cataloguer was delighted with the result and commented, “The model was in good condition, with only minor wear and the bonus is that it came with its original box; even though the box wasn’t in perfect condition, it is still highly desirable. I hoped it would do well after the pre-sale interest and am not surprised it was contended over the internet and bought by a continental bidder.”

Other highlights from the section included a group of advertising posters for railway journeys across the country, the top lot of these was the LNER ‘Whitby – It’s Quicker By Train’, which had been professionally restored and mounted on linen, and sold for top estimate of £1000. Selling for £2,500 was the top lot of the toys, a scratch built 5” gauge live steam Collett class 5700 0-6-0 Pannier Tank locomotive.

Included alongside the Toys, Models and Collectables was a selective Sporting and Fishing Section which reached a hammer total of £19,930. A collection of Rugby Union Programmes and other sporting programmes, tickets and paperwork smashed its £60-80 estimate and sold for £1,100, and a manuscript record of statistics and results of Yorkshire Cricket Club between 1907 and 1909 reached its top pre-sale estimate selling for £800.

There were also good results across the fishing section for Hardy Reels, Cased taxidermy fish, rods and tackle. However one of the main highlights of the sale was a collection of signed Premier League football shirts which were sold on behalf of Guide Dogs for the Blind, by former England Footballer Dave Thomas.

Kegan Harrison commented, “Since the proceeds of the sale were going to a fantastic charity the shirts had modest pre-sale estimate to attract the largest number of potential bidders and allow them to decide the prices on the day. We were all extremely happy with the results achieved with Manchester United and surprise Premiership Champions Leicester leading the way. It was a great pleasure to work with Dave Thomas and the Guide Dogs for the Blind in making this a successful sale all round.”