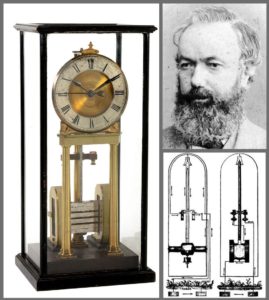 Research suggests that the piece can be attributed to Alexander Bain (1810-1877), the Scottish ‘father of electric timekeeping’ and engineer who invented the patent for the electric clock.

Bain trained as a clockmaker in Scotland, before relocating to London in 1837. He was a regular attendee of lectures at the Polytechnic Institute and by 1840 he had developed designs for electromagnetic timepieces. Bain collaborated with the chronometer maker John Barwise and in 1840 applied for a patent for his design of timepiece driven by electromagnetic pulses to the pendulum. He would go on to show examples of his work at The Great Exhibition of 1851, and was awarded the Exhibition Council Medal Class X, a prize given for excellence in production or workmanship. 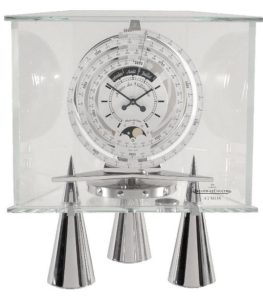 Very few of Bain’s timepieces appear to have survived and this is a rare opportunity to acquire such an important instrument. Another example of his work, a burr maple electric master clock from the mid-19th century, with its dial inscribed Alex.R Bain’s Patent Electric Clock, No. 117, sold at Bonhams in 2011  for £40,800. 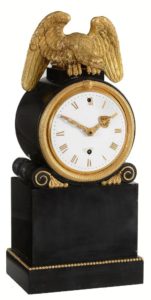 Other standout lots include:

A fine Swiss ‘Atmos Du Millenaire Atlantis’ timpiece with moonphase and thousand year calendar by Jaeger-LeCoultre with an estimate of £3000 to £5000.

A fine Regency Ormolu and Derbyshire black marble library mantel timepiece from 19th century maker Lewis Vulliamy. The clock has an estimate of £2000 to £3000.

The sale takes place on 20th September at the Donnington Priory auction house in Berkshire.