There are signs that the Asian art market might be stabilising after a relatively volatile period, says John Nicholson’s Fine Art Auctioneers and Valuers after its recent Oriental sale.

While prices as a whole stayed close to their estimates, specialist Mark Grant noted that many more items reached their reserves and went on to sell than has been the case in recent months.

Added to this was a greater number of bidders in the room and online, with several hundred registering to bid across the three online bidding platforms that the auctioneer uses. 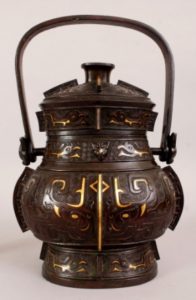 Top lot of the sale was a Chinese Ming Dynasty inlaid bronze You vase and cover. Modelled on the design of an early Western Zhou original, with overhead swing handle, it was well cast and decorated in gold and silver inlay with Taotie masks and vertical flanges. The underside of the cover and interior each carried an archaic inscription and the vase stood 42cm high to the top of its swing handle. It came in just under the top estimate at £29,000.

A bid of £6,500 went over top estimate to capture the highlight Japanese lot, a pair of 19cm-high Meiji period shibayama and lacquer vases and covers.

Of the numerous other lots that sold for thousands of pounds, the sale’s highlights included two Meiji period figures: a 16.5cm signed ivory okimono of a puppeteer sold for £2,600 and, at the same price, a large ivory figure of jurojin, weighing 7.78kg, the base with a red stained seal mark, standing 57cm high.

Two other star lots among the Japanese wares were an 18th century Edo period carved ivory netsuke of a Tata archer, which sold for £1,000, and an unusual signed Meiji/Taisho period wood and ivory sectional group of a man standing on a boat which took £1,100.