An array of Art Deco glass by the legendary French designer René Lalique will go under the hammer at Bonhams Home and Interiors sale later this month. 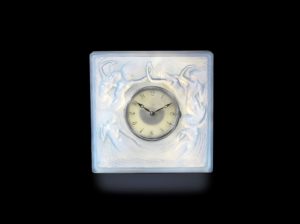 Highlights include an opalescent, frosted ‘Sirenés’ clock featuring nymph-like figures dancing around the large-scale clockface. The piece is estimated at £20,000-25,000. Elsewhere, a magnificent ‘Bali’ vase, designed by Lalique in 1930 featuring a moulded relief of birds in flight, has an estimate of £25,000-30,000.

René Lalique (1860-1945) was a celebrated figure of the Art Nouveau and Art Deco movements whose work was as highly fashionable during his lifetime as it is sought after today – by private collectors and interior designers alike.

Starting his career as a jewellery designer, Lalique won fame for the ground-breaking use of non-precious materials such as horn and glass. Later commissioned to produce perfume bottles for some of the leading companies of the day including Worth and Coty, experiments in packaging led to the development of the world-famous Lalique brand as it is known today.

Examples of the early Lalique perfume bottles are included in the auction, presenting an opportunity for first-time buyers to enter the Lalique market. For the more experienced collector there are decorative vases and statues in a variety of designs, many of them reflecting the vogue styles of Art Nouveau and Art Deco that characterised French taste in the pre-war period.

Gemma Mitchell, Bonhams’ specialist in 20th Century Decorative Arts said, “Since Bonhams pioneered the sale of Lalique in the 1980s, the designer’s sculpture has become an established feature of the London auction calendar. This upcoming sale features an exciting array of items personally designed by the great René Lalique prior to his death in 1945 including a number of rare examples; it is the legacy and inspiration of Rene’s work which maintains the popularity of the luxurious and celebrated Lalique brand today.”

This sale will boast around fifty items from Robert White’s wide collection of pre-war Lalique glassware – including several examples of the designer’s remarkable clocks and a rare pre-war example of the Bacchantes vase, estimated at £15,000-20,000.

Other pieces from Robert White’s estate, including a lavish collection of Lalique motoring mascots, will be sold at Bonhams, New Bond Street, on the 19th September.