A rare and valuable print by LS Lowry, bought by its current owner for just £1, has been discovered during a routine valuation day in Stratford held by Hansons Auctioneers. 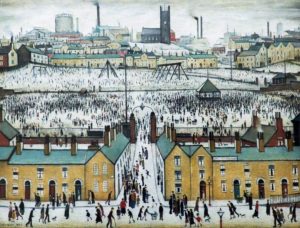 The colour print is after a famous original work by Laurence S Lowry and titled Britain at Play.  The print is a limited edition run and carries the all-important signature of the artist himself.

The print depicts one of Lowry’s most significant works created during the Second World War, (1943) and shows a busy urban scene with St Michael’s Flags and Angel Meadow Park, Manchester.

Signed Lowry prints are one of the great success stories in the auction world with prices climbing significantly in recent years for the most rare and desirable issues.

Hansons said that they expected the print could fetch up to £4,000 when offered in their Decorative Arts Auction on Tuesday 25th October. Not bad for a £1 print.