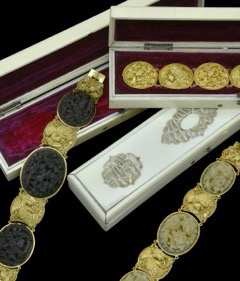 The trio of late 19th to early 20th century bracelets, two of which had carved tortoiseshell and hornbill panels, and all from the same Chinese workshop, had been estimated at £1500 to £2000 each. They all sold to a Chinese buyer for £5,700, £5500 and £5200, showing the continued strength of the market for high-quality Chinese pieces.

Other highlights of the sale included a single stone diamond ring, the old brilliant-cut diamond weighing 6.08 carats, selling for £19,200, and a 1970s’ amethyst and rock crystal choker necklace, made for a private commission by the internationally renowned jeweller David Thomas, which fetched £5,760.

A collection of four Georgian posy rings and another example dating from the 16th century all comfortably achieved their estimates between £1,000 and £2,000, whilst a beautiful Edwardian diamond and black opal brooch with a fine display of colour fetched £5,000, at the top end of the estimate.