Four key pieces of Oriental art look set to be the highlights in a West Sussex auction house next month, with hopes that a pair of  vases could fetch up to £80,000. 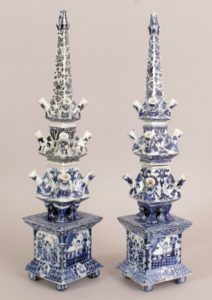 Each 16¼in (41cm) high vase is formed of two interconnecting parts and shaped as a spire, with moulded square sections to form three tiers of flower holders emanating from masks. The spires are supported on paw feet divided by moulded birds, while each plinth is supported on pad feet and painted with panels of cherubim amid flowers alternating with panels of putti dancing on a fence-bordered terrace.

A similar pair of vases can been seen in the collection of Earl Spencer at Althorp House. This pair were designed to display the highly prized blooms individually in the decades after Tulip mania peaked in the Netherlands, when single bulbs could change hands for vast sums. The vases also have considerable value with an estimate of £60,000-80,000 for the pair. 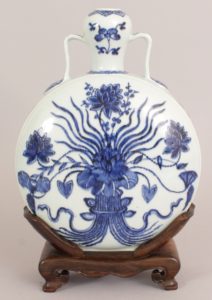 The auction also presents a Chinese Yongzheng period, Ming-style blue and white porcelain example of a moon flask, together with a fine quality fitted wood stand. The moon flask is of bianhu form, each slightly domed side painted with a formal arrangement of lotus, while the neck features moulded ruyi scroll handles. The flask is 7½in (19cm) wide at widest point & 10in (25.5cm) high. It carries hopes of £35,000-45,000. 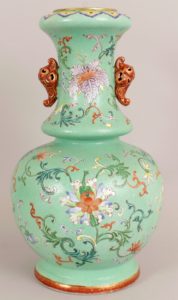 The third highlight in the sale is an early 19th century Chinese lime green ground famille rose porcelain vase. Standing 15½in (39cm), the vase is formed of an ovoid body rising to a waisted neck moulded with pierced elephant-form handles painted in iron-red and gilding. The sides and neck of the vase are painted with formal arrangements of European-inspired flowerheads and scrolling stems reserved on an incised sgraffito ground. It is expected to fetch £10,000-15,000. 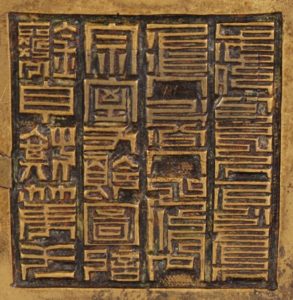 Finally, the sale will offer a rare 18th century Chinese Qianlong period official bronze seal, retaining much of its original gilding. Dated 1760, one side is inscribed December in the 25th year of the Qing Emperor Qianlong, while the other side carries the inscription Qian and the number 12381. The reverse is inscribed The first clan family of the second white banner and is also inscribed Department of the Ministry of Rites. At just 2⅓in (6cm) square and 4in (10cm) long, the guide price is £8000-12,000.