An important group of nine medals awarded to a cavalryman who charged with Kitchener’s 21st Lancers at the bloody Battle of Omdurman in 1898 and then wrote a chilling account of the encounter to his family at home in will be sold at The Canterbury Auction Galleries in a three-day sale on October 6-8. 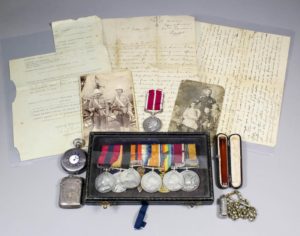 Private, later Sgt. A. E. Keane, who was awarded the Distinguished Conduct Medal in 1916, also received the Queen’s Sudan Medal, the Queen’s South Africa Medal with bar for Cape Colony, the 1914-15 Star, 1914-1918 War Medal, Victory medal (with oak leaves), the Edward VII Long Service and Good Conduct Medal, the Khedive’s Sudan Medal 1896-1908 with bar for Khartoum and, for his later service with the Military Mounted Police, the George VI Army Meritorious Service Medal.

They will be offered with the letter dated October 2,1898 addressed to his father and sisters describing the battle; black and white photographs, one of Sgt Keane with his wife and four children and another in his police uniform wearing eight of the medals; a silver half hunter pocket watch and chain inscribed: “Presented to A.E. Keane D.C.M by India Office colleagues on his retirement March 22nd 1929“; a silver rectangular vesta case and a selection of black and white photographs showing him and his family in later life and associated paperwork.

The collection has been sent for sale by Keane’s great nephew, who lives in Whitstable, and is estimated together at £2,000-3,000.

The 21st Lancers’ action, with a young Winston Churchill among their number, has been described as the last meaningful British cavalry charge in history, assisting in the defeat of Abdullah al-Taashi, the successor to the self-proclaimed Mahdi, Muhammad Ahmad.

Keane’s letter reads: “… we kept advancing when the colonel gave the order troops right wheel to line gallop and then charge and then they opened fire on us. We was going as fast as we could (my hair was standing up straight on my head). Well we kept on until we got about 50 yards off when up they jumped about 3,000 out of a water course it was madness so for us to stop them and we kept straight on. We had to jump the nullah (riverbed) before we could get at them and then we started the slaughter. They was about 20 thick. I got my lance into one and I could not get it out so I had to draw my sword … the blood was flowing in streams”.

The battle, seen as Kitchener seeking revenge for the death of General Gordon in 1884, resulted in the death of about 10,000 Mahdists, 13,000 wounded and 5,000 taken prisoners. Kitchener’s force lost 47 men with 382 wounded. Four Victoria Crosses were awarded, three to men of the 21st Lancers.

The Queen’s Sudan Medal was awarded to British and Egyptian forces who took part in the campaign between 1896 and 1898. On the reverse is a plinth inscribed “SUDAN” supported by Nile lilies where Victoria sits holding a laurel wreath and a palm branch and behind her are the British and Egyptian flags.

The medal group will be sold on the second of the three-day sale and will be on display among around 70 lots of other militaria and a total of 1,400 lots of fine art, antiques and collectors items as follows: Saturday October 1, from 10am-4pm, Sunday October 2, 12noon – 4pm, Monday October 3, 10am-7pm and on the morning of the sales from 8.30.