History graduate Helen Robson, Fine Art Administrator at Lacy, Scott & Knight has been with the Suffolk auction house for almost 14 years and loves the variation involved with antiques and auctions. Here she looks at the history of the Arts & Crafts Movement and how furniture from the era is currently much in demand in the saleroom.

Despite the general doldrums surrounding the brown furniture market at the moment, it has been noticeable that Arts & Crafts furniture has been achieving some excellent prices at auction. The clean lines and stunning workmanship of these pieces are clear, but the movement itself has a fascinating background steeped in Socialist ideals and artistic integrity.

Inspired by the ideas of architect Augustus Pugin (1812–1852), art critic and writer John Ruskin (1819–1900), and prominent Socialist artist and designer William Morris (1834–1896), the Arts and Crafts Movement began in Britain circa 1880 and quickly spread beyond our shores. As a reaction to rapid industrialisation (and the inherent decline in standards), it advocated a revival of traditional handicrafts, a return to a simpler way of life and an improvement in the design of ordinary domestic objects.

The disastrous effects of industrial manufacture and unregulated trade on workers and standards of craftsmanship had been recognised since about 1840, therefore the Arts & Crafts Movement placed great value on craft, the joy of artisanship and the natural beauty of materials.

The movement took its name from the Arts and Crafts Exhibition Society, founded in 1887, but it encompassed a wide range of like-minded societies, workshops, and manufacturers. The members upheld Mediaeval art as the model for much of Arts and Crafts design, the Mediaeval way of life (before capitalism and the factory system) and workers guild system was idealised by the movement. 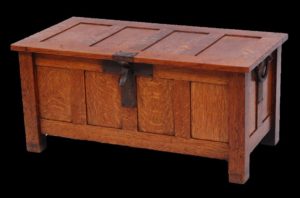 Typically the style encompassed these basic tenets: handmade, simple forms, the beauty of natural materials (including copper and pewter insets), and the inclusion of simple motifs such as Celtic symbols, inverted hearts, stylised flowers, etc.

The style is beautifully expressed in this oak four-panel coffer, probably by Liberty & Co, which sold in our recent Twentieth Century Design auction for £3,600. 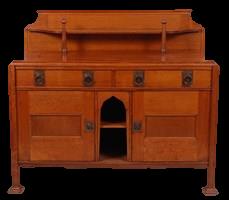 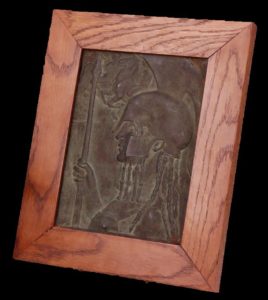 By the 1880s Morris was an internationally renowned and commercially successful designer and manufacturer. Upcoming artists, designers and manufacturers flocked to the Arts & Crafts standard, and helped to bring the Arts and Crafts ideals to the attention of the wider public. 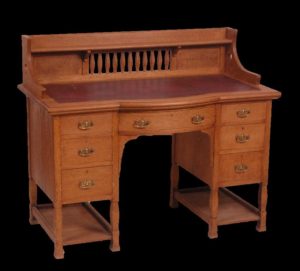 By the end of the nineteenth century, Arts and Crafts ideals had influenced all areas of art and design including architecture, painting, book making, domestic design including furniture and woodwork, stained glass, embroidery, weaving, jewellery and metalwork, enamelling and ceramics.

Despite, or maybe because of, its high ideals the Arts and Crafts Movement was doomed as a Socialist endeavour. Their opposition to modern methods of production and the tendency to look back to the mediaeval world, rather than forward to a progressive era of mechanization, eventually led to the failure of the movement. Their socialist ideal of producing affordable quality handcrafted design for the masses was untenable as the production costs of their designs were so high that they could only be purchased by the wealthy.

However, the work is still beautiful and desirable, and is again selling for high prices today. In this era of zero hours contracts, the threat of computers taking jobs, and an abundance of flat-pack furniture, it appears that the Arts & Crafts Movement has a new generation of fans.