An exhibition charting the rise and influence of British punk band The Jam is to be sold off in one of the biggest rock n roll auctions to ever take place in Europe. 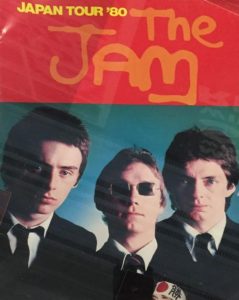 About the Young Idea has been on display in Liverpool’s Cunard Building, one of the iconic Three Graces on Liverpool’s waterfront, since Friday 1st July and will remain on show until Sunday 25th September to the public before the vast proportion of the exhibition is auctioned off on site on Friday the 7th and Saturday the 8th of October.

The collection is currently being catalogued and described as the most comprehensive exploration of the music, background, political and social impact of the band who were the voice of a generation and contains over 800 lots, all of which will be sold with a possible sale total of over £500,000.

Buyers will be able to bid for four of The Jam founder members’ items – Bruce Foxton’s guitars, Rick Buckler’s famous ‘Great White’ drum kit and some unique first record pressings, including an interesting example from Peru where the band’s name got lost in translation so appears on the cover as ‘The Ham’. 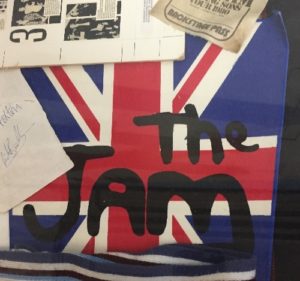 Curated by frontman Paul Weller’s sister Nicky and Den Davis, the exhibition and auction will include many never before seen items from the private archives of the band, as well as a collection of some of the most impressive memorabilia the bands’ loyal fan base have collected over the years.

“This is an unbelievable collection and some of the lots will be dream keepsakes to fans of the band and fans of British music,” said Adam Partridge Auctioneers and Valuers auctioneer – Chris Surfleet, who will be taking the two day sale.

“The drum kit could be yours for £20,000-£30,000. We have every record pressing from every one of their releases, all original recording acetates, tour jackets and clothing worn by the band during their time together 78-82, including one of Weller’s pin stripe suits and a Wembley dressing gown,” Chris added.

The auction starts at 10am on Friday the 7th of October and continues at the same time on Saturday the 8th of October. Viewing will take place on Wednesday 5th & Thursday 6th October from 10am-8pm.