An album of fine botanical watercolours, including eleven works by Georg Dionysus Ehret (1708-1770), 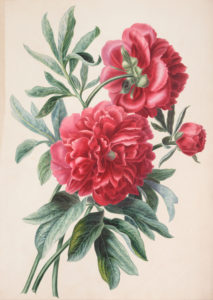 created huge global interest and after fierce bidding on the telephone and internet finally sold for £170,000.

A wide array of volumes with illustrations by Pogany, Rackham, Jessie King, Dulac and Heath Robinson all soared past sale estimates, with strong bidding from trade and private collectors.

Twentieth Century literature also had an impressive showing with numerous Bond titles achieving impressive sums, together with a first edition of Le Carre’s The Spy Who Came in From the Cold going under the hammer at £800. Sherlock Holmes also had a good day with early editions attracting significant international interest, a lot containing the Adventures of… and Memoirs of… getting away at £1200 and The Hound of the Baskervilles selling for £380.

There was massive media attention in a group of letters sent to the notorious Durham murderess Mary Ann Cotton. Giving an interesting insight into her final days these were sold for £1,050 against an estimate of £500-700.
Elsewhere, there were very good results in the cartographic, topographical and local history sections.