A Surrey auction house as said its recent sale of fine paintings was “just like the good old days’, with pictures climbing over their pre-sale estimates. 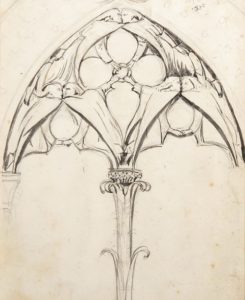 Specialist Buffy Parker of John Nicholson’s said what got him most excited was the £10,000 bid for a pencil and wash design by the Pre-Raphaelite artist Sir John Everett Millais (1829-96). Titled Architectural Design for Window 1853 and inscribed ‘Sky Stars’, the unframed 9 x 7¼in picture had carried an estimate of £2,000-3,000.

“The full size drawing of this sold in Sotheby’s Belgravia in the 1970s for £150,” said Parker. “So this was an excellent price for the smaller sketch, and was the result of a fierce three-way fight over the phone.”

Another phone bidder – a US buyer – took the next most expensive lot, a charming 30 x 22in oil on canvas in the Victorian tradition of a young girl kneeling up in bed and saying her prayers. By William Henry Gore (active 1880-1927), it went more than five times over top estimate at £6,500.

Two phone bidders were eventually outbid by someone in the saleroom for the two Sidney Richard Percy (1821-86) landscapes, one with mountains, water and cattle, measuring 9 x 15in and dated ’72, the other dated a year later and titled Sound of Scalps, Isle of Skye. Together they had been pitched at £3,000-5,000, but rose to a hammer bid of £6,000. 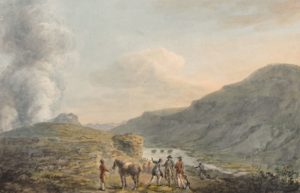 Another pair of companion pieces, this time by Nicholas Pocock (1740-821) did well at £4200. Two signed and inscribed watercolour views of geysers estimated at £1,500-2,000, they had come from the hand of an artist and former merchant shipmaster better known for painting scenes of naval battles from the American Revolutionary and Franco-British conflicts of the late 18th century.

The same hammer price secured an impressionistic riverscape with cattle attributed to the 20th Century English School. Indistinctly signed, it had been guided at just £200-300. At least two bidders clearly thought they had identified the artist.

Elsewhere, further evidence that Francis Boileau Cadell (1883-1937) continues to be a banker as one of the four celebrated Scottish Colourists. A consignment of three landscaped by the artist to this sale followed the success at the September 7 auction of Cadell’s highly accomplished portrait of a woman thought to be Hazel Martyn, the second wife of the artist Sir John Lavery, whom Cadell is known to have depicted on a number of occasions.

The previous lot, showing a nearby scene and inscribed to the reverse: ‘No 8 Iona, at the North End, June 1927’, left a matching guide behind to take £3400, again on the phone. And another phone bid won the final Cadell, View towards Lunga, inscribed, ‘No 10 Iona, View towards Lunga, June 1927’, on the reverse. Also unframed, it sold against the same hopes for £2400.

A classic cardinal interior by Cleto Luzzi (1884-1952), depicting the typical sumptuous furnishings and clothing such scenes, was titled Recital for the Cardinal and showed a number of figures in 18th century dress watching a man and a young girl at the harpsichord. These pictures, once so popular, now appeal to fewer tastes, but those who like them pursue them with vigour, as here. It went just under top estimate at £3,600.

Finally, Girl in a White Dress, a highly atmospheric impastoed picture with a darkly contrasting background was an 18½ x 14½in oil on canvas attributed to the Russian painter Tatiana Nilovna Yablonskaya (1917-2006). The signed work had been expected to fetch just £400-600, but keen bidding helped it soar to £2200.