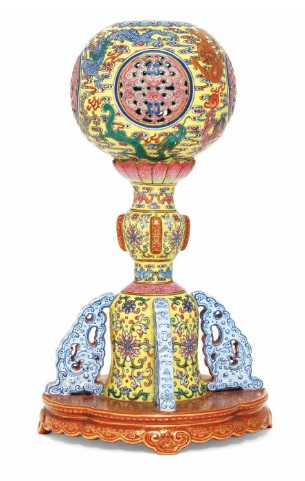 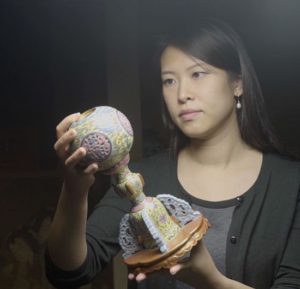 The 19th century imperial and very rare yellow-ground famille rose ‘Nine Dragons’ hat stand carries the six-character Daoguang seal mark in gilt. It stands 27.3 cm high and was made between 1821-1850.

Christie’s specialist Ivy Chan, “This fascinating object was kept in a house in North Wales for over 50 years, where it was used as a lamp.”

The stand displays some of the renowned opulence of the Daoguang court, where rank and status was shown by the clothes worn by courtiers, which would have been displayed on highly decorated stands when not in use.

The exceptional detail on this stand and its rich colours suggest its owner would have been extremely important, and could even have belonged to the Emperor Daoguang.

When used as a stand it would have been scented, with the upper section filled with fragrant materials that diffused through holes.

“What was achieved in the 19th century under imperial patronage is really amazing,” concludes Chan. “The invention of new colours, glazes and enamels really exemplifies the technical abilities of the craftsmen at the time.”