Leading names such as Gerhard Richter, Roy Lichtenstein and David Hockney all caught the attention of collectors.

Jean-Paul Engelen and Robert Manley, worldwide co-heads of 20th Century & Contemporary Art at Phillips, said, “We are thrilled with tonight’s outcome as it demonstrates the vitality of the market for 20th century and contemporary art and shows the momentum at Phillips as our results were 66% higher than the same sale last year. There was a great deal of bidding in the auction room as collectors remain committed to exceptional works by world-renowned artists.”

He continued, “We were very proud to set records for works by two female Latin American artists, Carmen Herrera and Mira Schendel. And we were pleased with the results of the Tommy Hilfiger Collection, which achieved a combined $7 million. We look forward to continuing this momentum with our first sale of 20th Century & Contemporary Art & Design in Hong Kong later this month.” 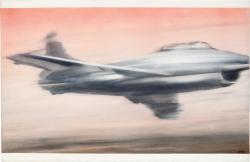 Leading the sale was Gerhard Richter’s photorealist masterwork Dϋsenjäger, which realized $25,565,000. Düsenjäger was completed in 1963 as part of the artist’s small and celebrated group of warplane pictures. It previously sold in 2007 for $11.2 million, a record auction price for the artist.

Clyfford Still’s Untitled, circa 1948-1949, achieved $13,690,000, marking the first time the work has been sold at auction, as well as the first time Phillips has offered a work by the artist.

With more than 95% of Still’s oeuvre held by the Clyfford Still Museum in Denver, it is rare to see a work of this calibre come to auction. Roy Lichtenstein’s Nudes in Mirror, 1994, one of the best iterations from the artist’s celebrated Nudes series, sold for $21,530,000. In 2005, this work was exhibited at Austria’s Kunsthaus Bregenz, where it was famously vandalized. The painting underwent a meticulous restoration and the art historical significance of the work remains unchanged. With so few examples from the Nudes series in public hands, it was a rare opportunity for one to be offered publicly.