A rare and previously undiscovered parcel label which was set to be delivered on board the infamous ocean liner the RMS Titanic will be offered in a Stamps & Postal History sale at Mossgreen auctions in Australia this month. 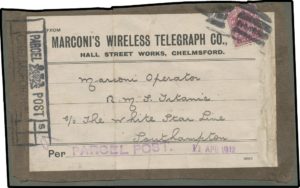 With an estimate of AUD$20,000 (£12,000), the label was bought by a collector in England, who initially had no idea of its remarkable historical significance, the label is addressed to “Marconi Operator/RMS Titanic/co The White Star Line/Southampton”.

It is likely that, on arrival at Southampton, the packet was handed to the first officer of Titanic’s sister-ship, the Olympic, with the intention that it would then be delivered to the Titanic on its arrival New York.

The largest passenger liner in service at the time, the RMS Titanic was said to be unsinkable. However, it was on its maiden voyage in April 1012 when it collided with an iceberg and sunk to the sea floor with the tragic loss of 1,500 lives.

This surviving label is a complete ‘Marconi’s Wireless Telegraph Co/… Chelmsford’ parcel label measuring 150 x 95mm with private ‘PARCEL POST.’ & ’11APR1912′ stamped by hand in violet. A British KEVII 6d stamp is cancelled by the ‘CHELMSFORD’-in-Bars parcels cancel. There is also a part-strike of the large-boxed ‘PARCEL [Coat of Arms] CHELMSFORD/…’ A date stamp on the left confirms the postage cost of “6[d]”.

It is believed that the label has been with the family to whom it was given in 1912 by the First Officer of the Olympic. It will be offered with a piece of unused headed notepaper with embossed ‘On board RMS Oceanic’, plus two small original photographs, one captioned “Wireless/Apparatus” & the other “Alec Bagot/Marconi Operator/on RMS Olympic”.

Director of Stamps & Postal History, Gary Watson said, “In my opinion, this parcel label is the most evocative and most important postal item associated with the most famous of maritime disasters.”

In their authoritative work, “Maritime Disaster Mail” (2003), Norman Hoggarth and Robin Gwynn state “…The only surviving items with postal associations are in the class of fascinating ephemera…several postmarked facing slips used by OS Woody, one of three American postal clerks on the Royal Mail ship…There are [also two recorded] surviving articles posted on “Titanic” & taken off the ship [at Southampton] before the trans-Atlantic portion of its journey. And there exist a letter & a postcard written but not posted on board by two survivors…”

The sale takes place on 29th to 30th November.

One thought on “Marconi parcel label in sale”