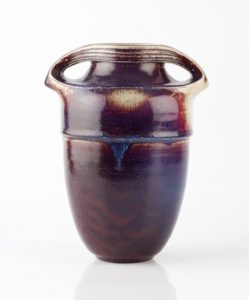 An innovative stoneware vase by Henry Van De Velde for Reinhold Hanke made in c1920 has sold for £17,000 at Mallams of Oxford. The design marked a radical departure for the German ceramics industry at the time.

Two years previously the Exposition Universelle in Paris had been a chastening experience for the potteries of Westerwald. Traditional saltglazed stonewares had appeared distinctly old-fashioned next to the sensuality of Art Nouveau.

By early 1902, eager not to repeat their failure at the Deutsch-Nationalen Kunstausstellung in Dusseldorf later in the year, Westerwald District Council, turned to a group of avant-garde designers to provide the zeitgeist. 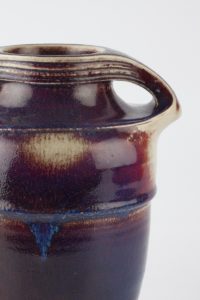 This vase was among a series of sinuous organic designs created by the Belgian architect Henry Van De Velde (1863-1957) for a number of different local potters. Most of these were produced in the traditional hues of grey and blue, but his most ambitious collaboration with the Reinhold Hanke factory succeeded in creating Westerwald’s first sang-de-boeuf glazes.

These experimental wares in striking shades of purple and red were frequently unsuccessful, and only a handful survive. Examples of the distinctive two-handled vase – pictured in a room setting from the Deutsch-Nationalen Kunstausstellung in Dusseldorf – can be found in the British Museum, London and the Museum fur Kunst und Gewerbe, Hamburg