A set of 16 books by the 19th Century American author Mark Twain is expected to excite book collectors when it comes up for sale at Wolverhampton auction house Cuttlestones next month. 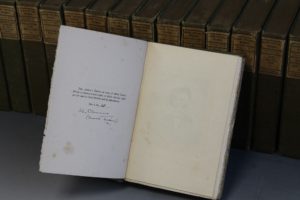 Originally part of the 22 volume ‘Author’s Edition de Luxe’, published 1899 – 1901 by Chatto & Windus, with a limited run of only 620 copies for sale in Great Britain and its dependencies, it believed that only 250 of the sets were ever sold.

This part set is No. 48/620 and, although missing volumes II, IV, VII, IX, XVIII, XX, is rare and likely to be of significant interest to both Mark Twain fans and book collectors. 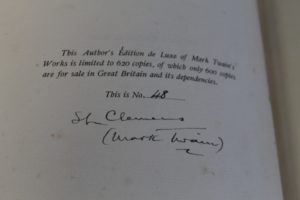 Cuttlestones’ books specialist Rosie Blackburn says, “This is a really interesting lot – as one of only 250 copies believed to have been sold originally these will not regularly be coming up for sale. Despite the fact that several volumes are missing this is still of strong interest for fans of Mark Twain’s work and for general collectors on antiquarian works. The key here is the signed volume – with Mark Twain being such an iconic figure of American literature, we are expecting keen bids from over the pond.”

Cuttlestones has a impressive track record for achieving significant sums for books in its sales – selling a collection of early and first edition Charles Dickens novels for in excess of £15,000 back in August 2016 – the Mark Twain tomes should fare well; bearing a guide price of £600-800.

Also of particular note within the books section of Cuttlestones’ Specialist Collectors’ Sale are a large collection of naval interest books; including many specialist volumes on the construction of model ships.

The collection of 16 Mark Twain novels will go under the hammer at Cuttlestones’ Wolverhampton auction room on Friday 3rd February.