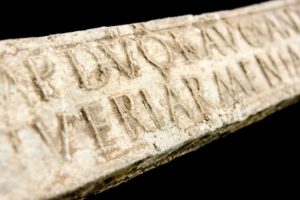 A rare 2000-year-old Roman lead ingot weighing six stone is to be sold at Hansons in Derbyshire in March.

Discovered by a metal detectorist in a field in the West Country last year, the artefact is expected to make up to £20,000 at Hansons Historica auction on Wednesday 22nd March. The ingot carries the inscribed names of both Marcus Aurelius and Lucius Verus who ruled as co-emperors between AD 161 and 169.

Charles Hanson, manager of Hansons Auctioneers, commented, “We are thrilled to be asked to handle an object which is so monumental and important to our understanding of the extent of the Roman Empire across England.” Engraved to the face of the 2-foot ingot is the inscription of the Emperors. It would have been made in a lead furnace close to a Roman centre in Somerset, most likely a lead mine within the Mendip Hills, south of Bristol.

Even though the item as laid in the ground for the best part of 2000 years, it is in remarkably good condition.

Charles said, “It is quite remarkable to consider this ingot was crafted at a time in Roman England and during a reign which followed that of Hadrian, who had built his wall close to modern day Scotland to ‘separate Romans from Barbarians’ thirty years prior.”

He continued, “The ingot is in spectacular condition and the lettering is still very crisp. I hope it finds its way in to a museum since it is the most original of its type. In fact, a fragmented one is on display in the museum of Somerset whilst two others were found in the 16th and 18th centuries and have subsequently become lost.”