Essex auction house Sworders will provide a timely reminder of the many talents of the late Lord Snowdon at their 20th Century Decorative Arts and Design sale on January 31st. 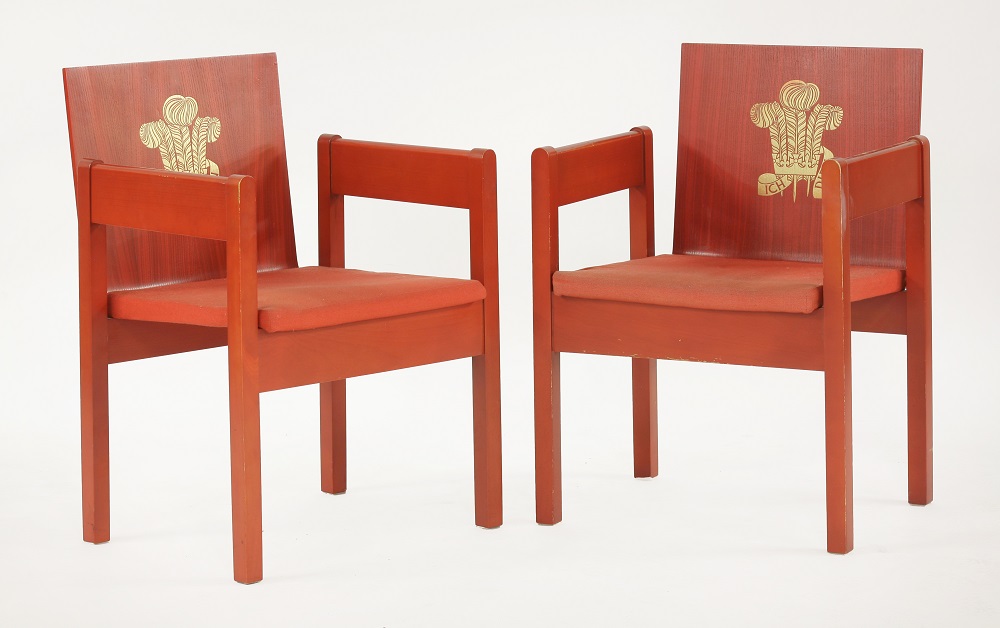 Two chairs he designed for the use of dignitaries at the Investiture of Prince Charles as Prince of Wales at Caernarfon Castle on July 1, 1969 come to auction at Stansted Mountfitchet.

Known as the Red Chair, 4600 were made using Welsh beech and were painted red and gilt with Prince of Wales feathers and his motto ICH DIEN indented on them. They were sold off after the ceremony, with the dignitaries themselves being offered first refusal. The two on sale here are being offered with an invitation to the investiture for ‘His Excellency the High Commissioner for Pakistan and Begum Haroun’. The vendor’s mother was social secretary at the Pakistan Embassy and the chairs were later given to her.

History records that while the chairs were a great success, Lord Snowdon’ design for his own uniform for the investiture, as Constable of the Castle, was less so, and it was reported that he admitted that it made him look like a pantomime character.

Much more celebrated was his role as chairman of the committee that produced the gold coronet, with diamonds set in platinum, used to invest the Prince on the occasion.

Lord Snowdon, who died aged 86 on January 13th, was helped in the design of the chairs by the stage designer Carl Toms and the principle design officer with the Supplies Division at the Ministry of Public Works, John Pound. Together they were also charged with overseeing other designs for the investiture, many of which did not meet Lord Snowdon’s approval.

“Lord Snowdon is chiefly remembered for his outstanding gifts as a photographer, but these chairs show that his eye was as tutored and talented in design as well,” said Sworders managing director Guy Schooling.

“These talents have clearly passed on to his son, Lord Linley – now the new Earl of Snowdon – whose own accomplishments in the world of furniture and accessories design are extremely well documented. We are just pleased to have the opportunity to celebrate the First Earl’s talents in the weeks after his passing.”