Three oyster dishes from the famous Imperial Raphael dinner service that were hidden in a cupboard for almost ninety years are coming to auction with an estimate of £15,000 to £20,000.

Discovered during a valuation event hosted by Tennants in the Yorkshire Dales, the dishes were brought to the UK in the 1920s when an engineer from a Blackburn firm of boiler manufacturers travelled several times to post-revolutionary
Moscow on trade missions. During his visits he was bestowed with gifts before returning to his native Lancashire. These Russian gifts were carefully stowed away in an old oak corner cupboard. They lay undisturbed for almost ninety years, until his granddaughter began to research the items and turned to Tennants for advice. 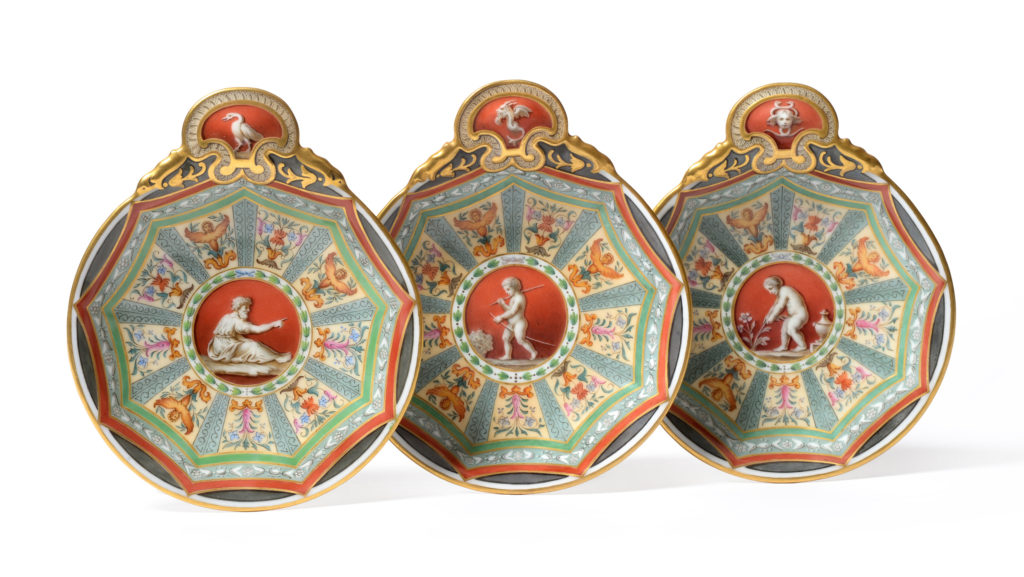 Steve Stockton, Valuer and Head of Tennants Harrogate Office said of his first encounter with the collection at a Valuation Event at The Devonshire Arms, “It is said that you should always expect the unexpected, but sometimes as an antiques valuer, the unexpected is so rare, so beautiful, so unusual and so totally out of context that it simply takes your breath away. That was certainly how I felt when I encountered Russian Imperial treasures on a grey day in Bolton Abbey”.

The Raphael Service was the most opulent service produced by the Imperial Porcelain Factory in St Petersburg, and took over two decades to complete. Commissioned by Tsar Nicholas II in 1883 for the palace in Tsarskoe Selo, the design of the service was inspired by the classical interior decoration in Raphael’s Loggias in the Vatican.

Also up for sale from the collection are a pair of Russian Imperial wine glasses from the service made for Grand Duke Nicholas Nikolaevich, son of Nicholas I, beautifully engraved with a crowned monogram (estimate £3,000 – 5,000); and a set of six linen napkins bearing the royal cypher of Tsar Nicholas II (estimate £1,000-2,000).