The Arts & Crafts movements flourished from around 1880 until 1910 and inspired a further generation of early 20th century furniture and cabinetmakers whose hand-crafted designs are as sought after today as they were in the years leading up to the Second World War.

Driven by a philosophy that embraced simplicity of form and aesthetic in the pursuit of functional design, its exponents created true beauty, whether constructing domestic furniture, silverware or interior design.

At the beating heart of their activity was the traditional workshop rather than the factory production line, a setting that encouraged and fostered a wide range of craft skills within each individual rather than limiting their vision and scope to the pulling of a lever or pressing of a button. 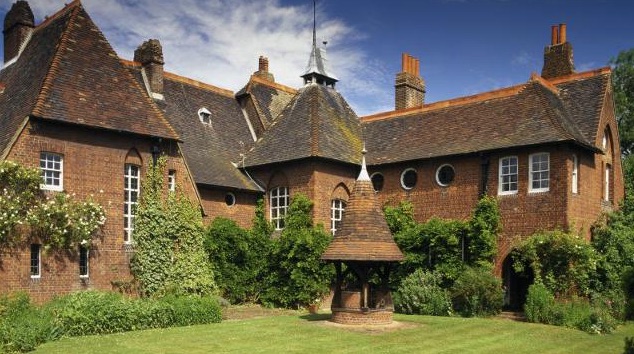 Inspired by what they saw as the honesty of the vernacular, names like Charles Voysey, Philip Webb – who designed the Red House (left) – Charles Ashbee, Lewis Day and the inimitable William Morris did not limit themselves to one field of expertise, but designed furniture, glass, jewellery, wallpaper, textiles and other items.

Slightly less known but just as collectable is Leonard Wyburd, who was head of Liberty’s Furnishing and Decoration Studio from its foundation in 1883 until 1903 and adapted his early Moorish aesthetic style with the times. At the turn of the 20th century, E G Punnett was designing for William Birch, who retailed through Liberty & Co, adding a classic Art Nouveau stylised tulip motif to his most famous piece of furniture, the oak, rush-seated chair.

Heavily influenced by Morris and elected a member of the Art Workers Guild in 1896, the Scot Robert Lorimer impressed the Arts and Crafts style on Edinburgh, while in Glasgow, his exact contemporary, the much higher profile Charles Rennie Mackintosh was at the centre of the Glasgow School of Art movement with his fabulous designs, most notably, perhaps, his celebrated high-backed chairs that inspired so many imitators.

The American-born George Jack, another member of the Art Workers Guild, also found his way in Scotland, training there before joining Philip Webb’s office as a contemporary of William Morris for whom he designed furniture. Another contemporary and Art Workers Guild member was Charles Spooner, who, like so many others at the time, divided his time between architecture and other disciplines.

Ambrose Heal started making simple furniture for the family firm in the 1890s. After initial doubts, it became extremely popular, and he continued to design even after taking over at the helm of Heal & Son in 1913 on the death of his father.

Ernest Gimson – described by Nikolaus Pevsner as “the greatest of the English architect-designers”, is understandably one of the most collectable designers today, especially for pieces made by his collaborator Peter Waals. Two major prices of recent years – both by Waals – have been the £34,000 paid for a secretaire cabinet at Bearnes Hampton & Littlewood in Exeter in October 2014 and the £42,000 bid for a secretaire chest of drawers at Sworders of Stansted Mountfitchet on January 31, 2017.

Gimson was also closely associated with the Barnsley brothers, Ernest and Sidney, whose own son, Edward, built his reputation as a master cabinetmaker, and whose Edward Barnsley Workshop still turns out stunning hand-crafted furniture today from its premises near Petersfield in Hampshire.

Other Barnsley associates included Waals again, and also Gordon Russell, whose star has been rising for some time. Russell, whose father owned the famous Lygon Arms hotel in Broadway in The Cotswolds, personally designed and made furniture for a period of just over ten years until 1930, when he shifted his attention to managing the business and let others make the benches. Those early personal designs are what you want to look for and there are several hundred examples out there whose whereabouts are unknown – a dream for would-be collectors. His impact on furniture design is celebrated in the Gordon Russell Museum, situated just behind the Lygon Arms in the Broadway.

As Russell was building his business in The Cotswolds, Stanley Webb Davies was doing the same at his Windermere workshop, where he worked for over 40 years, fervently holding back the tide of mechanisation with handheld tools.

Also starting up at the time was Robert ‘Mouseman’ Thompson, whose Kilburn, North Yorkshire workshop turned out solid oak furniture almost always carved with a mouse and so sought after today that the same Sworders sale took £380 for a Mouseman tray. The mouse motif led to a whole raft of other furniture makers and carvers adopting similar ideas, spawning Gnomeman, Beaverman, Squirrelman, Foxman and even Eagleman. It’s worth keeping an eye on which of these will gather a significant following.

Wales also had its moment with the Brynmawr Furniture Makers, led by the designer Paul Matt, who found work thanks to the Quakers after the Coalfields Distress Committee of the Society of Friends set up the Gwalia Works in response to the Great Depression of the late 1920s.

As Gordon Russell, the Mouseman workshop and others have shown, skilled craftsmanship has continued into modern times, augmented by post-War Scandinavian and British utilitarian designs to create inspired ranges of modern furniture that find ready markets today. And as with the Edward Barnsley Workshop, people like John Makepeace and Gareth Neal, working in wood, have carved out their own special niche in this tradition. These will be the antiques that everyone will be clamouring for in the future.

Following a highly successful set of results for Arts & Crafts and later workshop furniture at Sworders’ 20th Century Decorative Art and Design auction in January this year, specialist director John Black provides a quick few tips on the names to know and what to look for in Arts and Crafts design.

Ernest Gimson: The top tier of Arts and Crafts design, as illustrated by the £42,000 secrétaire in our sale. Cabinetmaker Peter Waals used Gimson’s designs after his death, but this design’s provenance to the Page Croft family of Fanhams Hall, the 18th century Queen Anne-style house in Ware, Hertfordshire, shows it was made during Gimson’s lifetime. Not all Gimson pieces are marked, but records of his designs can be found at the Cheltenham Trust, and Country Life remains a great record of early pieces.

Gordon Russell: The man himself designed around 1000 pieces between 1922 and 1930, before quitting to manage the firm. Key pieces can sell in the tens of thousands of pounds. His personal designs include furniture, metalwork and glass. Last year’s BADA Fair hosted a loan exhibition from the Gordon Russell Museum, highlighting key works by Russell from the 1920s.

Many earlier pieces carry clear labeling identifying them as Russell designs, but the whereabouts of most extant examples is unknown. Later pieces from his workshop include the series of Murphy radio sets and even an early television set from the 1930s and ’40s.

Robert ‘Mouseman’ Thompson: From simple bowls to sets of furniture and even paneling for rooms, Mouseman is always popular, with prices for pieces made during his lifetime (he died in 1955) ranging higher. The earliest pieces from the 1920s and early ’30s have a different style of signature mouse from the later ones, distinguishable by its front paws (or where they have broken off). Later pieces tend to have a lighter finish and mice without paws. Construction techniques for some furniture also vary depending on their age. Even the position of the mouse can be an indication of age. The workshops are still selling second-hand furniture and new pieces. Prices have risen to around £40,000 for the best.

Stanley Webb Davies: Lesser known but increasingly popular, Davies designed and made domestic and ecclesiastical furniture in the Cotswold School style from his Windermere workshop for around 40 years, retiring in 1961. As his designs attract greater interest, more are coming onto the market to feed demand.

Many pieces are carved with his distinctive logo, initials and date, with earlier pieces carrying a premium. In 2014, we sold an oak dining room suite for £6600, which remains a high point for Davies pricewise.

Shapland and Petter: This Barnstaple firm was established in the late 1880s by Henry Shapland, a cabinetmaker, and Henry Petter, a salesman and sold designs through Liberty’s. It had its roots in Arts & Crafts but not its philosophy, opting for factory-based production, while employing the best craftsmen it could find and train. Its distinctive designs have started to attract a keen collecting base. Features include repoussé copper panels to the oak furniture, pierced shapes in the Arts and Crafts style and decorative inlays and mounts in ceramic, enamel, wood and metal. Less sought after are designs inspired by Jacobean and other revival styles. Many pieces carry the firm’s original mounted label for easy identification. Prices can rise to £4000-5000 for the best pieces, with room for growth here.