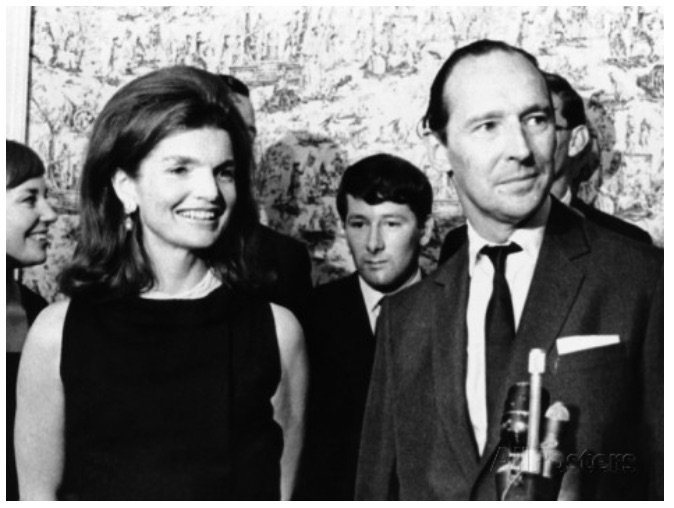 Letters revealing the lovelorn relationship between Jackie Kennedy and a British Ambassador to the US during the Kennedy Presidency are to be sold at Bonhams next month.

The letters, written by Jackie Kennedy to David Ormsby Gore (the 5th Lord Harlech), Britain’s Ambassador in the USA, also reveal for the first time that Ormsby Gore proposed marriage to Jackie Kennedy, why she turned him down and why, shortly afterwards, she married Aristotle Onassis.

They are to be sold at The Contents of Glyn Cywarch – the Property of Lord Harlech Sale at Bonhams in London on behalf of Jasset, 7th Lord Harlech.

The letters form part of a cache of papers that have been locked away unseen in two despatch boxes at Glyn Cywarch, the Harlech family house, since Lord Harlech’s death in 1985, including personal correspondence from President Kennedy and from British Prime Ministers, Harold Macmillan, Sir Alec Douglas-Home and Harold Wilson. The archive is estimated at £100,000-150,000.

Bonhams Head of Fine Books and Manuscripts in the UK, Matthew Haley said, “For decades, biographers have speculated on the precise relationship between Jackie Kennedy and David Ormsby Gore. These letters now show without doubt how close they came to marriage and why Jackie decided to marry Onassis instead. The correspondence has been sitting in two official red Government despatch boxes for more than 40 years. The keys were nowhere to be found and in the end we had to call a locksmith to slice through the locks. It was one of those astonishing moments when you can’t quite believe what you’re seeing.” 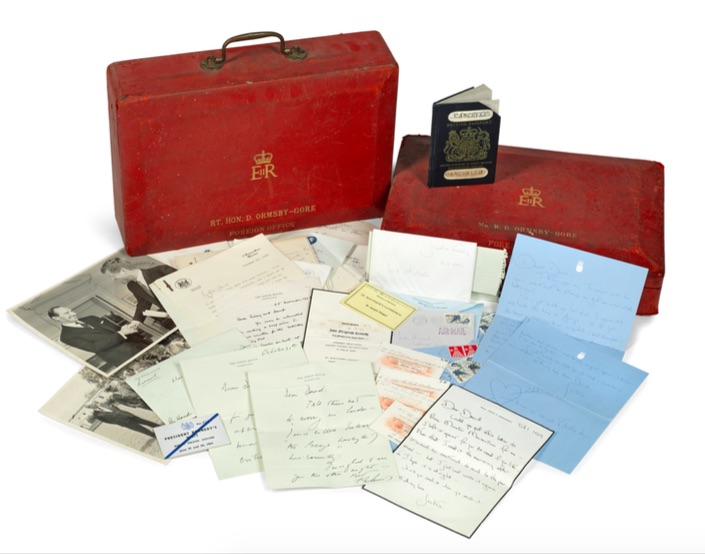 The 18 handwritten and one typed letters from Jackie Kennedy to David Ormsby Gore, 5th Lord Harlech, cover her days as First Lady from the assassination of President Kennedy until her marriage to Onassis in October 1968. They show a warm and very close relationship which deepened during 1967 after the tragic death in a car accident of Lord Harlech’s wife, Sissy, in May of that year. At the time, Jackie Kennedy wrote to him movingly, “Your last letter was such a cri de coeur of loneliness – I would do anything to take that anguish from you –  You want to patch the wounds & match the loose pairs – but you can’t because your life won’t turn out that way.”

During the following months, the two spent an increasing amount of time together, often on private holidays, and in February 1968 Harlech proposed marriage. Among the newly discovered documents is a draft of his wounded response to her rejection of the proposal.

“All the pathetic plans I had brought with me for visits to Cyrenaica, holidays near one another and a whole variety of solutions to our marriage problem, including one for a secret marriage this summer – plans which I saw us eagerly discussing, calmly and with complete frankness as we did at the Cape and in Cambodia for the next wonderful ten days – all had become irrelevant trash to be thrown away within a few hours of my landing in New York. As for your photograph I weep when I look at it. Why do such agonizing things have to happen? Where was the need for it? I have tried for hours and hours to understand your explanation and I suppose I do in a way, without agreeing with it; but what I find unbearable and in a way, dearest Jackie, untrue is that you could come to such a categorical conclusion…”

Her reply to him, is tender and soothing. “We have known so much & shared & lost so much together – Even if it isn’t the way you wish now – I hope that bond of love and pain will never be cut… You are like my beloved beloved brother – and mentor – and the only original spirit I know – as you were to Jack.”

In June of that year Robert Kennedy was assassinated while seeking the Democratic Party nomination for the Presidency. Harlech was one of the pall bearers at the funeral. Shortly after the suppression of the Prague Spring by Soviet Forces in August, Jackie wrote to Harlech lamenting the state of the world, “I thought your speech about Czechoslovakia so beautiful – it brought tears to my eyes – Reading it you can’t believe that the same things are being said – or rather done – all over again – and that as before, it is England who is the bravest…  Ones private despair is so trivial now – because wherever you look there is nothing to not despair over – I keep thinking of what Jack used to say – ‘that every man can make a difference & that every man should try.”

In the final letter written from Aristotle Onassis’s yacht Christina, Jackie tries to explain why she had married the billionaire Greek shipping magnate, “You and I have shared so many lives and deaths and hopes and pain – we will share them forever and be forever bound together by them… If ever I can find some healing and some comfort – it has to be with someone who is not a part of all my world of past and pain – I can find that now – if the world will let us.”

Jasset, Lord Harlech, the grandson of David Ormsby Gore, said “Though he sadly passed away before I was born, I knew even from an early age that my grandfather had been British Ambassador to the United States. There is much history that binds the Kennedys and the Ormsby Gores together. The more I read or was told about David by other relatives, the more I wanted to know. He seems to have been a most insightful and intelligent man. He had a career spanning military service, politics and diplomacy; he set up his own television station and was chairman of the British Board of Film Classification; all impressive in their own right, but I am told his greatest attributes were his thoughtfulness, charm, and sense of morality.”

There is also a range of political letters, revealed for first time in the Ormsby Gore despatch box,, included in the sale. These detail the strong personal and family links between John Kennedy and David Ormsby Gore which influenced the decision of British Prime Minister Harold Macmillan to appoint the latter, a non-career diplomat, as Ambassador to Washington in 1960. (Ormsby Gore assumed the title of Lord Harlech in 1964 on the death of his father, a year before he ceased to be ambassador). Robert Kennedy described Ormsby Gore as being “almost a part of the government”, recalling that his brother the President “would rather have his judgment than that of almost anybody else… He’d rather have… his ideas, his suggestions and recommendations than even anybody in our own government.” This became especially important during the Cuban Missile Crisis in 1962.

Elsewhere, a handwritten letter from Kennedy to Ormsby Gore in the cache attests to this closeness.  “…I appreciate as you know, in all these critical matters your judgement – which I have found to be uniformly good and true. The P.M was excellent this week – I do not like these stories which have as their object a disparagement of the real value of our alliance. I am sure Your government knows better”

Harold Macmillan had equal faith in Ormsby Gore’s abilities, writing to him after his first year as Ambassador, ““I think your position is really something unique in the annals of the British Embassy in Washington and we are all really grateful for what you are doing”.

Other letters in the archive include:

Harvey Cammell, Deputy Chairman of Bonhams UK said, “Of all the many discoveries we have made in this wonderful collection, the Kennedy Harlech papers are surely the most remarkable.  I am expecting unprecedented interest in this unique auction, the contents of which has kept our team enthralled since our first visit to this incredibly beautiful and historic house.  It is, without doubt, one of the most fascinating private collections to come on the market in recent times.”