A picture that is believed to be the earliest known oil painting of Dandie Dinmont terriers has been discovered and will go on display at The Chelsea Antiques, Art & Design Fair at Chelsea Old Town Hall, 15th – 19th March 2017. 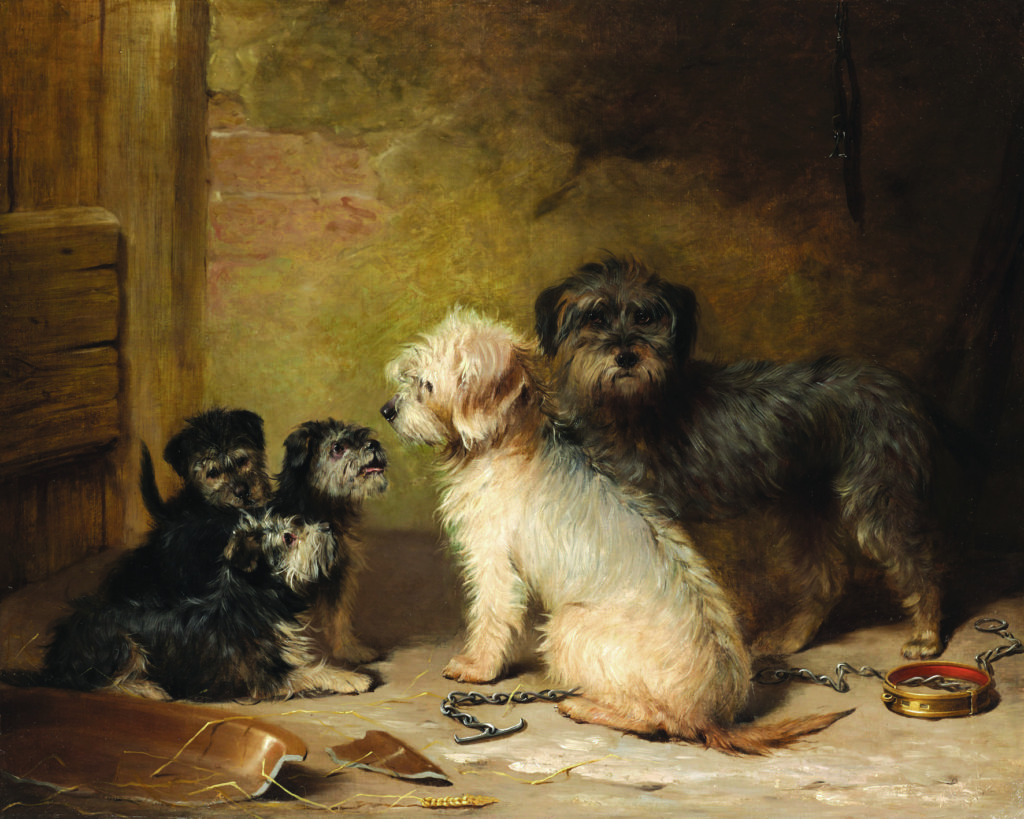 This large and impressive oil painting by Henry Calvert (1798-1869), an artist known for accomplished depictions of horses and dogs. It measures 40 x 50 inches, is signed and dated 1848 and was exhibited at the Royal Manchester Institution in the same year where it was specifically titled The Dandie Dinmont Family.

The painting was owned in 1848 by Mr. David Laing Esq, who would have commissioned the artist. No earlier oil paintings of this breed of terrier are known to exist and, until recent research, the picture was thought to simply depict a group of cute dogs. The painting will be shown at the fair by Bagshawe Fine Art where it will be priced at £28,500.

Nicholas Bagshawe said, “Very recent painstaking research has unearthed a catalogue for an exhibition at the Royal Manchester Institution where the painting is listed with its original title of The Dandie Dinmont Family. It shows the dogs as they would have been seen in the early 19th century and is surely the first known depiction in oils of the breed. The substantial size – and therefore expensive cost – of the picture seems to underline Mr Laing’s considerable pride in this canine family. This will be a most exciting discovery to Dinmont enthusiasts.’

The breed traces its origins to Scotland and is possibly a cross between a Border Terrier and a Skye Terrier. It’s name was derived from the character Dandie Dinmont in Sir Walter Scott’s novel Guy Mannering, who kept terriers.

When Scott wrote Guy Mannering, he included a character by the name of “Dandie Dinmont” who owned a number of terriers named “Pepper” and “Mustard” after the colours of their coats. The Dinmont character was partly based on the real life farmer and terrier owner, Mr. James Davidson, who used the generic terms of Pepper and Mustard for his dogs depending on their coats. The dogs came to be known as Dandie Dinmont’s terriers, with the apostrophe “s” being dropped as time went by. To this day the two colors of the breed are still known as Pepper (bluish black) and Mustard (shades of golden brown). Davidson’s dogs are believed to have come from a variety of sources including the dogs of the Allan, Anderson and Faas families. Davidson documented his breeding, and has been accepted as the father of the modern breed. Davidson’s dogs descended from earlier terrier owning families, including the Allans of Holystone, Northumberland. It is now a designated Vulnerable Native Breed by the Kennel Club.