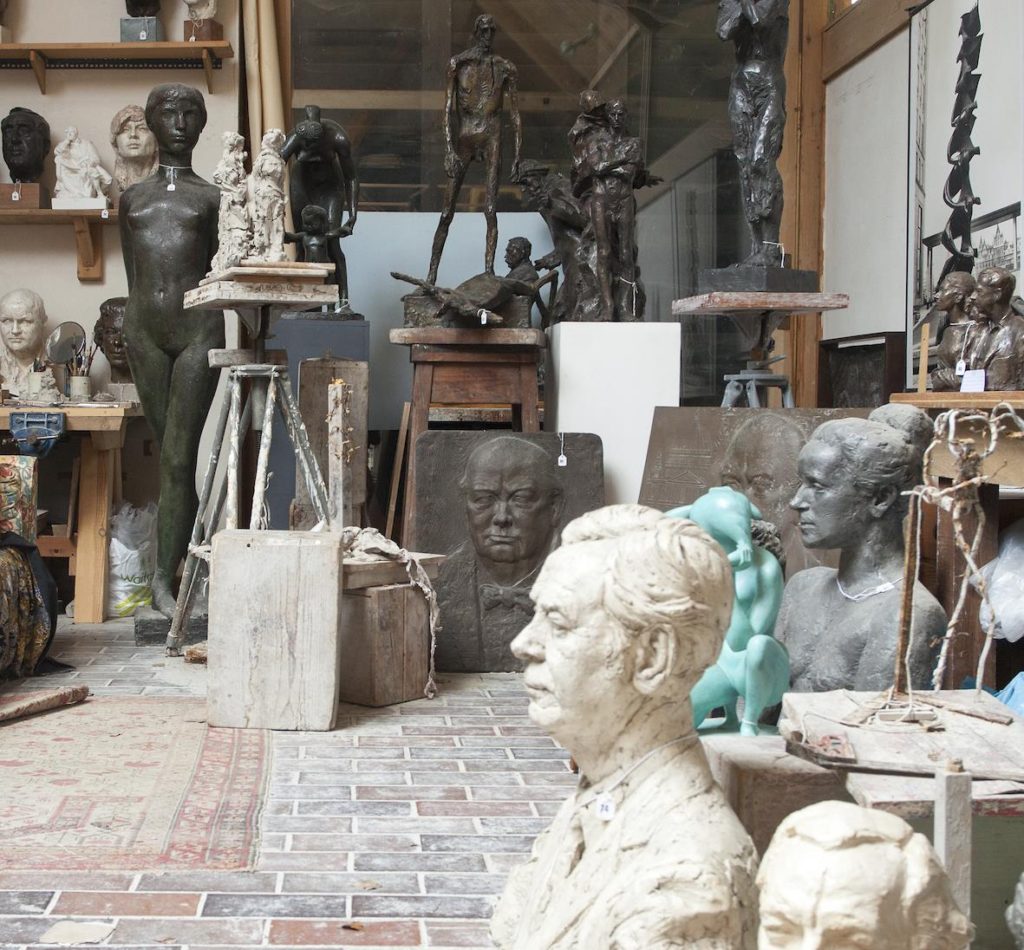 Works from the shared studio of distinguished sculptors Franta Belsky and Irena Sedlecka are to be sold at Mallams auction house in Oxford.

Franta Belsky is best known for his sculptures of Churchill, Lord Mountbatten, HM The Queen, the Queen Mother, The Duke of Edinburgh and Prince William and Irena Sedlecka was best known for her work on Freddy Mercury, Beau Brummell (IN PICADILLY), and Sir John Gielgud (as Hamlet).

Sale prices range from £100 – £10,000 for the contents of this famous studio sited at the couple’s home in Oxfordshire.

Phillip Smith, Head of Modern & Post-War Art at Mallams, comments: “This sale provides a once in a lifetime opportunity to bid for works and personal effects of these two remarkable émigré artists whose reputation in Britain grew steadily over the years and whose works adorn the capital.”

Mallams auction house in Oxford are honoured to be selling a number of works from the shared studio of distinguished sculptors who arrived in Britain in 1940 and 1967 respectively. The sale includes:

Franta Belsky (1921-2000) was born in Czechoslovakia and arrived in Britain in 1940, five weeks after the Dunkirk evacuation. He came with the remnant of the Czechoslovak army which had been formed in France. When they arrived in England they were inspected by Winston Churchill whom he would later sculpt.

In 1968 Belsky completed his statue of Churchill for Fulton, Missouri, where the statesman had made his “iron curtain” speech in 1946. In 1988 the then Soviet leader, Mikhail Gorbachev, stood near the statue and said: “The sculptor of this statue expressed the spirit of wartime England.”

Belsky was a major force in British sculpture. He sculpted portrait busts of four generations of royalty, the Queen Mother (for the Queen Elizabeth Hospital, Birmingham), the Queen, the Duke of Edinburgh, Prince Andrew (as a baby and as a young man) and the three-and-a-half-year-old Prince William. He has five works – including three of the royal family – in the National Portrait Gallery, and 15 public sculptures in central London.

His work includes a mother carrying her child, placed in the centre of Stevenage and there is the Shell Fountain on the South Bank which is now listed as a Grade II sculpture to be preserved

In spite of his work with establishment figures Belsky believed that sculpture was not just for the great and the good but for the delight of everyone. He had a distinguished war record. In France in 1944 he received the Czech bravery award for actions while under fire.  After the war, he returned to Czechoslovakia with his first wife, Margaret Constance Owen, a talented cartoonist who died in 1989.

He married Irena Sedlecka in 1996. Irena was born in Czechoslovakia in 1928. She trained at the academy of Fine Arts in Prague and in 1967 she and her doctor husband fled the communists.

The works that she is best known for include those of Freddy Mercury of Queen which stands in Montreux, Switzerland; Beau Brummell in Piccadilly; and Sir John Gielgud as Hamlet. She also produced busts of football great, Sir Bobby Charlton and Sir Frank Whittle, inventor of the jet engine.

In August 1992 her work was shown at the Czech Embassy in London as part of an exhibition devoted to the work of five distinguished Czech émigré sculptors.