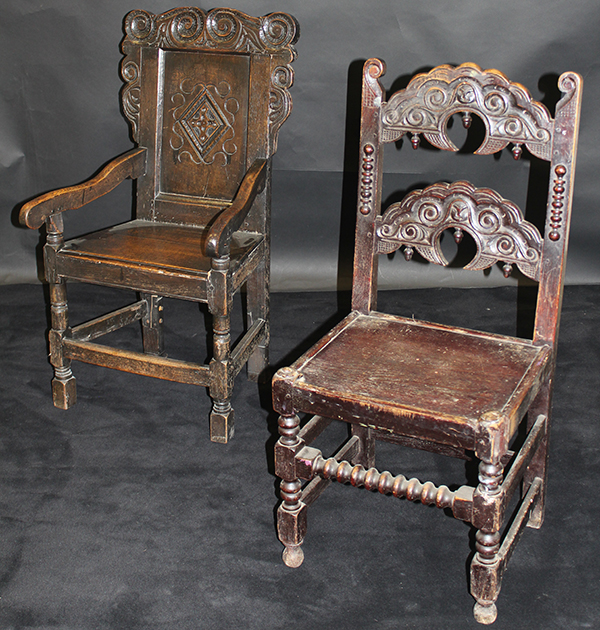 A wainscot chair defied all expectations at a recent Cotswolds auction to sell for twenty times its lower estimate. A buyer paid £980 for the chair, decorated with shaped swan neck pediment and diamond carved panelled back, at Moore Allen & Innocent’s antiques auction in Cirencester.

Auctioneers had modest expectations of bids between £50 to £80 for the chair, which they had bundled with a Victorian mahogany chair and a nest of three walnut coffee tables. The auction catalogue described it as: “Chair is very rickety and all the joints probably need attention. Various marks, scratches, scuffs, etc throughout.”

However, the impressive hammer price earned the chair the accolade of top price of the day. But that didn’t stop the buyer, who then went on to bid £550 for a second wainscot chair, an early example with 18th century elements. The lot also carried a low estimate of £60 to £80.

Wainscot chairs were common in the early 17th century in England and colonial America. They lack any upholstery, and the flat wooden seat and back – which is often decoratively carved – can make them quite uncomfortable to sit on.

Elsewhere a more modern British design classics, a light elm dining table by Ercol with four stick back elm seated Ercol chairs, achieved a winning bid of £500. Founded in 1920, Ercol made a name for itself in 1944 when, having won a contract from the Board of Trade to produce 100,000 low-cost Windsor chairs, the company perfected a method of steam bending English elm – a wood previously thought impossible to bend. Ercol furniture was exhibited at the 1951 Festival of Britain, as it represented the latest style and fashion in furniture design and manufacture.