A recent report from online auction aggregator Barnebys claims that top-end designer furniture could now be rivaling art as a collectable investment. 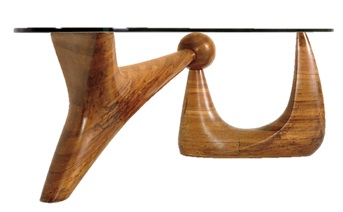 In its second Online Auction Report, a special edition focusing on 15 leading furniture designers of the 20th century, the search engine says there is no question that the market is growing, both in terms of inventory and turnover.

The company says its data shows a growth of 330% in the 15 designated designers’ accumulated turnover in the period 2009 to 2016. According to the recent TEFAF report for 2016, the auction market for design in Europe and the US is worth a total of $343,6 million (over £27 million).

Co-founder of Barnebys, Pontus Silfverstolpe said, “Collectors are paying considerable attention to design, with prices on a limited supply of unique high-end pieces boosted to fine art market status. It is clear that when prices and the novelty of a certain designer have declined, the market moves on to the next. So it is important for auction houses, as well as dealers, to continuously explore and collect new information on intriguing designers.

“The whole process is reminiscent of the early days of the now long- established market for art and antiques, which goes to show that design is more than a short-lived trend. Just like artists, great designers can fall into oblivion. Just like the art market, there is great potential of finding these forgotten masters. The addition of new names combined with new markets, like  Asia, will lead to a growth in the design market for a long time to come.”

* A unique and important table by Isamu Noguchi was sold at Phillips in New York for £3m. (Pictured above)

* In 2015, a one-off oak dining table by designer and cabinetmaker Peder Moos, made for the  Villa Aubertin in Norway, set a new auction record for Scandinavian design, after selling at more than four times its estimate for £687,000.

* Arne Jacobsen: early and unique chest of drawers went under the hammer at Phillips in London, selling for £80,000.