A fascinating wartime diary that was kept by a prisoner of war and remained hidden for 40 years is expected to create real interest in Suffolk auctioneers Bishop & Miller‘s first military, coins, scientific, maritime and arms sale this week. 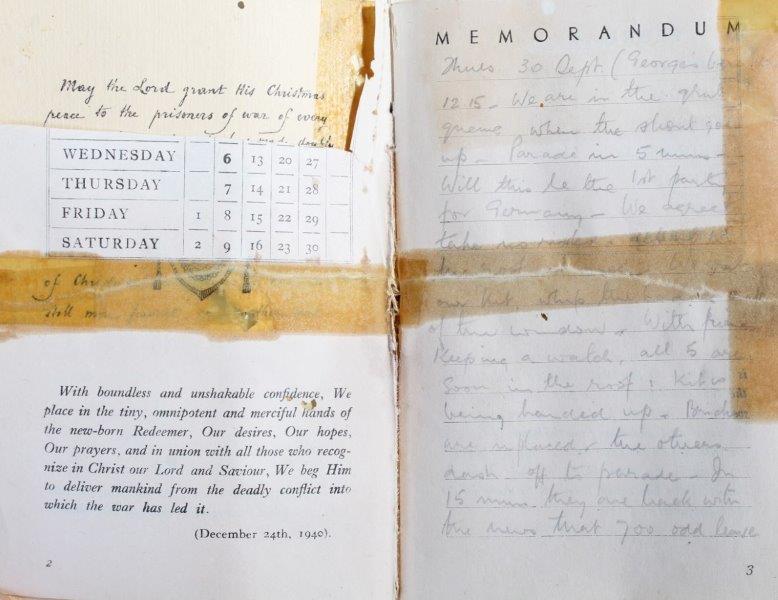 The diary was written by Captain John Beverly Edge of the 231 Median Battery R.A. 67th Med. Regt R.A. Middle East Forces. In 1942, he was made a prisoner in the camp Campo Di Concentramento Fonte Dell Amore, where he wrote his makeshift diary within a Christmas 1942 hymn book.

Later, in 1943 when the Italians surrendered to the Allies, Captain Edge, along with six fellow officers, fearing transportation to Germany, hid in the roofspace of their dwelling. However, after 19 days in the roof, the men took the decision to escape the camp. While initially the Captain attempted to destroy the diary by tearing it in half, he changed his mind and decided to hide it in the roof.

The soldiers split into two groups, with Captain Edge’s group scaling the fences and walls to make their escape. Unfortunately, the group was soon spotted within an olive grove by Germans and, after shots were fired, they were re-caught and sent back. They were then taken to Sulmona station to be sent to Germany.

Many years later, in 1962, the Captain decided to see if his diary was still in the prison roof. While three-quarters of the camp had been torn down, after a search the diary was amazingly recovered exactly where it had been hidden.

The fascinating lot will be sold with the corresponding government and military letters detailing Captain Edge’s search for his diary, alongside his POW tag, photographs, a hand-written recollection, silk maps and further letters.

Oliver Miller, Managing Director of Bishop & Miller, said, “This is such a fascinating lot and such an exciting piece to be able to sell. It is purely remarkable to be able to go back to the place where Captain Beverly Edge was held and to still find his diary hidden in the roof after so long is a wonderful ending to a horrific story.”